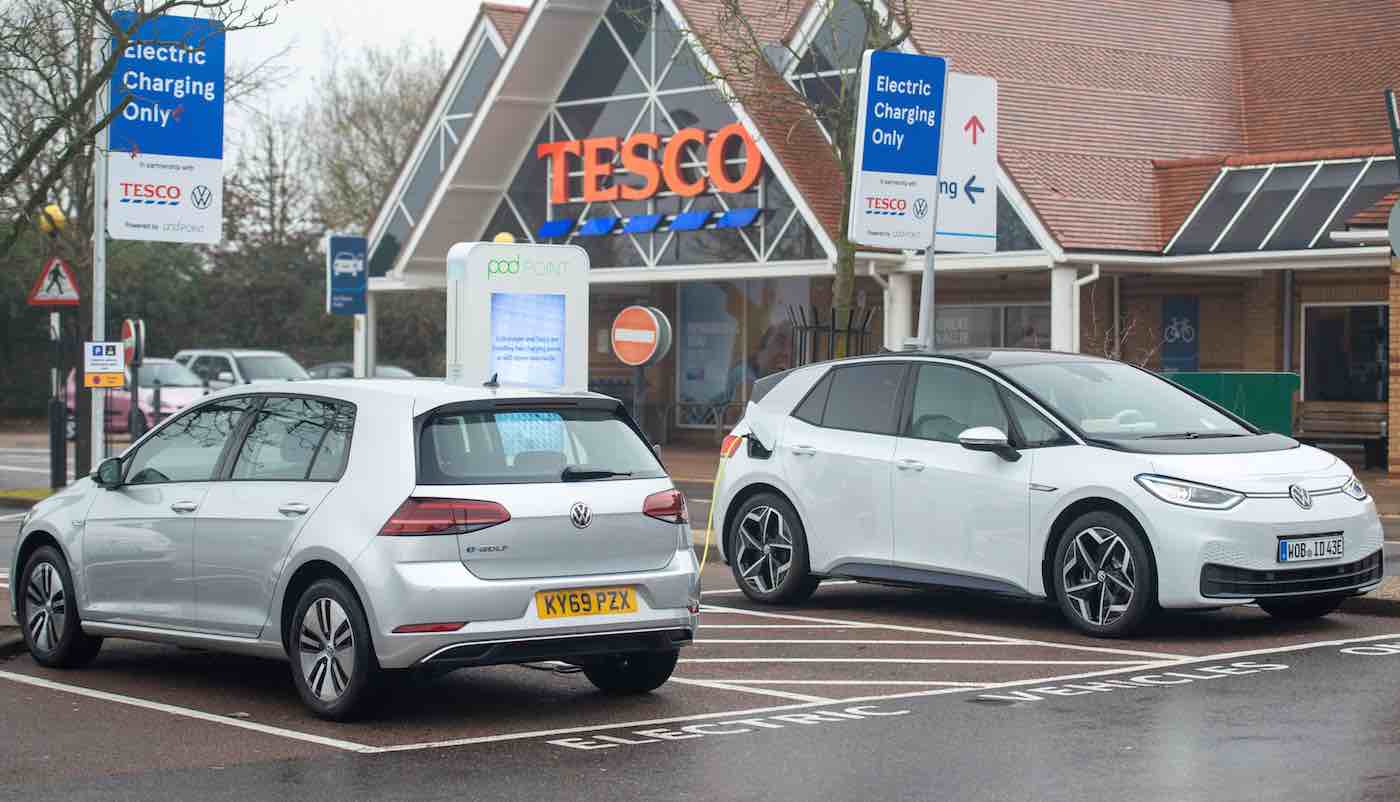 Electric car owners could get more than 1,000 miles of free driving per year thanks to the recent rollout of a groundbreaking new complimentary charging network.

Volkswagen announced last year that it had partnered with Tesco and Pod Point to install around 2,400 charging points for electric cars. Since the rollout is now well under way, electric vehicle owners can now top off their battery for free while shopping at 100 Tesco stores across the United Kingdom.

To highlight the scheme, Volkswagen visited the Potters Bar store in Hertfordshire with its all-electric ID.3—the first time the model has been in the UK since debuting at the Frankfurt Motor Show in September.

The appearance of the new car, which arrives at UK dealerships in the summer, coincided with research revealing that the average Brit spends 50 minutes per week in a supermarket buying food and drink.

RELATED: First UK Supermarket Chain to Eliminate Plastic From Produce Will Save 1,300 Tons of Plastic From Landfill

Electric car owners who plug in their vehicles could get around 22.5 miles of free charging from the 7kW points during that 50-minute period, which is more than enough time to do the weekly shop.

Over a whole year, this works out at 1,170 miles—the equivalent of driving from London to Rome—for free.

The partnership and the new ID.3, which has a range of up to 340 miles between charges, is part of Volkswagen’s drive to boost e-mobility and make electric cars more affordable for millions of people.

Its production is entirely carbon-neutral, with all of the electricity used to charge the cars at Tesco coming from renewable sources.

“Volkswagen literally means the people’s car, and with the ID.3 we are making electric car ownership more accessible,” said Geraldine Ingham, head of marketing at Volkswagen UK. “This fantastic partnership with Tesco and Pod Point makes choosing an electric car even more attractive, allowing people to charge for free, all while going about their daily business.

LOOK: First Marathon to Swap Plastic Bottles for Biodegradable Pouches Made Out of Plants

“And the best bit is that this is not just for Volkswagens—the chargers are designed for any electric car owner to take advantage of,” he added. “We are really pleased to help break down any remaining barriers to opting for an electric car.”

“Providing customers with charging points offers them a sustainable choice and giving them the opportunity to charge their car for free while they shop is another little help to make their lives easier.”

Data from Pod Point has revealed that the charging points were used more than 12,000 times in November, powering customers’ vehicles with almost 60,000 kWh of energy.

This is the equivalent of driving a Volkswagen e-Golf more than 250,000 miles—further than the distance to the moon.

“Providing smart, easy-to-use chargepoints at this scale is likely to accelerate the transition to electric cars up and down the country. Being able to top up while you shop at so many locations makes it more convenient to go electric than ever before.”

UK sales of pure electric vehicles are up by 125% this year, according to the Society of Motor Manufacturers and Traders.

And the growth is set to continue, with Volkswagen’s survey of 2,000 UK motorists revealing 41% are considering leasing or owning an EV as their next vehicle. This figure increases to 61% among the 25 to 34 age group.

LOOK: Entrepreneur Has Bought 10,000 Unused Ride-Sharing Bikes So He Can Donate Them to Poor Students

The survey also reveals 80% of Brits think free charging points are a good thing. Six in ten adults say they are more likely to buy an electric car if they can charge for free, while 68% reckon that companies in the UK should be doing more to encourage motorists to make the switch to electric cars.

It also highlighted the importance of public charging points with 43% of respondents saying they would rely on them to top their battery up rather than having somewhere to charge at home.

And there is a misconception among Brits when it comes to how much it costs to run an electric car. A Volkswagen e-Golf costs around 4 pence per mile in electricity – but the average adult questioned by OnePoll thought it would cost almost 9 pence per mile.

Volkswagen has now created a free online calculator which lets shoppers know how many free miles per year they could get from charging their electric car at Tesco.