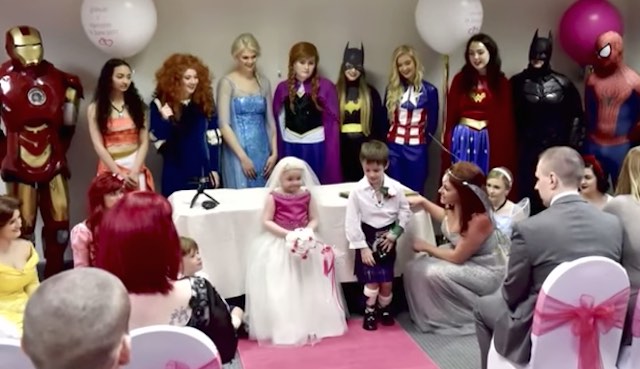 This little 5-year-old may not be at the age where someone should be thinking about marriage – but her special fairytale wedding was organized under special circumstances.

Eileidh Paterson was diagnosed with neuroblastoma in May 2014. When her oncologist declared that she would not be able to survive long-term, Eileidh started putting together her ultimate bucket list.

At the top of her list was marrying her 6-year-old best friend Harrison.

The young Scottish buddies were excited enough at the opportunity to “get married”. But they were even more excited, however, when they were given a fairytale wedding complete with superhero costumes and royal decorations.

The youngsters exchanged necklaces in front of the witnesses before Eileidh’s sister read a poem about love. Once the ceremony ended, the crowd began dancing.

“Harrison had never been to a wedding before, so this was all new to him,” Billy Grier, Harrison’s father, told Metro.co.uk. “But it was a beautiful ceremony and he enjoyed every minute. He was quite excited to do it. Ever since he met Eileidh, they have been inseparable.”