Home All News Heroes Woman Who Lives With 27 Sick Dogs Dubbed ‘Miracle Worker’ After Getting... 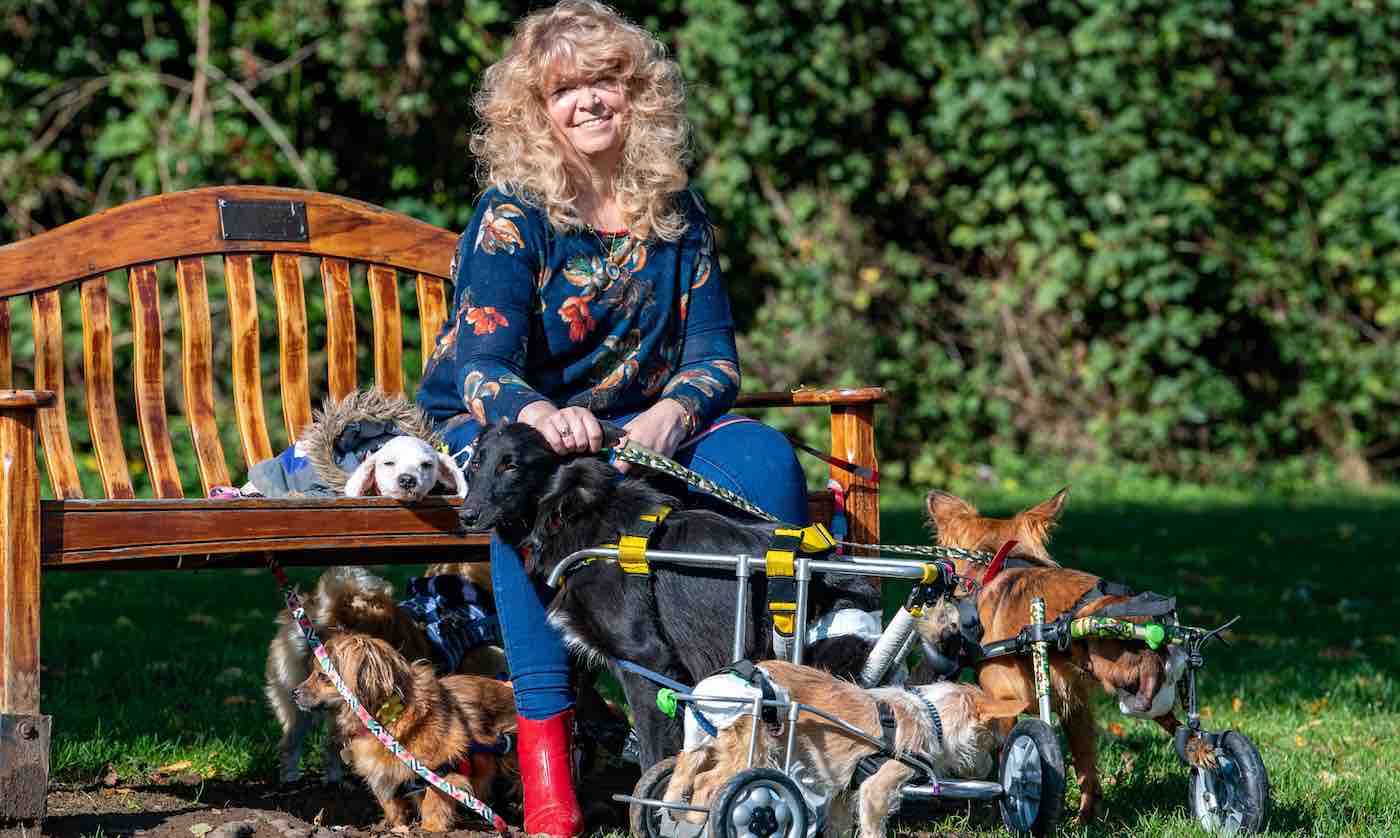 A dog-lover who cares for sick and disabled pooches from around the world has been dubbed a “miracle worker” after getting many of them back on their feet again.

48-year-old Claire-Louise Nixon shares her modest home with 27 dogs that no one else wanted.

Many of them are injured street dogs who have been abused—or lost limbs from landmines and explosives in former war zones. But, no matter what condition the dogs arrive in, Nixon is determined to get them walking again through intense physical therapy sessions and walks on wheels.

Her motley crew of dogs all share her four-bedroom semi-detached house in Milton Keynes with her husband Gary and 22-year-old daughter Rhia-Louise.

MORE: Man Moves into Shelter Kennel So He Can Help Unwanted Pup Get Adopted

While Nixon’s strategy is to find forever homes for the dogs, their immediate needs are quite often too complex. Several of her pups are—or were—paralyzed; and some of them even have to wear nappies (diapers).

For long walks the dogs are put in specially-made harnesses with wheels to act as false legs so they can enjoy getting outside while those that can’t walk are put in buggies. Other dogs are regularly taken for doggy hydrotherapy, while all those that can walk are taken out for exercise in rotation, a few at a time.

“When I get these dogs who are in such a bad way, the vet would say ‘Claire, you won’t get them walking again,’” says Nixon. “But now they say nothing is impossible! They say we work miracles with them!

“I think all they need is love, kindness and patience,” she continued. “When they walk into my house, they see other dogs like them so they don’t feel any different that’s why I think they do so well here.

“If you give them a reason to walk again, then they will,” she added.

Her addiction to caring for sick dogs all started 12 years ago when a puppy who was only a few days old was brought into the vet’s office to be put down. He had a hair lip and cleft palate which prevented him from suckling milk and feeding—but Nixon was determined to save him.

Nixon painstakingly hand-reared the puppy by feeding him with a bottle every few hours—and it escalated into having 27 disabled or sick dogs from there.

All her dogs are named after celebrities which she feels describes their personalities.

Sir Elton John, which Nixon named because of the song “I’m Still Standing”, was rescued from Romania after he was hit by a car and left with a broken spine. Thanks to Nixon’s help, he can now go on small walks.

CHECK OUT: When Pup’s Death Left Man Heartbroken, He Healed By Adopting 8 Senior Dogs That No One Wanted

Sherlock Holmes, who was aptly named for his intelligence and curiosity, was a street dog in Oman who was shot by a security guard.

“The dogs arrive with the most horrible pasts and we give them love and wonderful futures. They come from all over the world but with me, they are home forever.

“I’m really lucky in that all the neighbors have dogs themselves so we don’t get complaints. And although 27 dogs sounds a lot, they are really quite well behaved.”

In order to finance the dogs’ medical treatment, rehabilitation, and mobility equipment, Nixon raises funds through her organization, Wheels to Paws UK.

MORE: When Animal Shelter Uses Area 51 Internet Meme to Appeal for Adoptions, They Are Flooded With Support

Vets bills can be a huge drain on resources, but local vets are sympathetic to her cause and often offer a discount.

Nixon added: “The dog rescue charities abroad all know of me. So if they get a badly injured or disabled dog in need of specialist care they will pay to transport them to me in the UK. I can never say no.

“It is tremendous hard work but I can’t tell you how rewarding it is. The love these dogs give back is amazing. I would not be without any single one of them.”