LISTEN to this story here, as told by The Good News Guru, from Friday’s radio broadcast with Ellen K and Geri, GNN’s founder, on KOST-103.5 — Or, READ the story below… (Subscribe to our podcast on iTunes – or for Androids, on Podbean)

A young man’s perseverance and spirit has earned him praise from around the world – and a big reward he didn’t see coming.

The night before his first day of work with a moving company, Walter Carr’s vehicle broke down, and though he frantically tried to find someone to drive him the 20 miles— everything fell through.

The 20 year-old was broke and he didn’t want to miss the first day of his job, so he decided to walk the 20 miles from his apartment in Birmingham, Alabama to the job site, which he calculated would take him seven hours.

He took a long nap, got up at midnight, and started walking. Half way there, he decided to take a break in a parking lot, when a police car pulled up. Officer Mark Knighten listened as the young man explained his determination to get to his first day of work. He offered to buy him a hot breakfast and drove him the last ten miles.

POPULAR: Farmers Stay Silent During Auction So Young Man Can Win the Bid on His Long-Lost Family Farm

They arrived, 30 minutes before any of the other laborers, at the home of Jenny Lamey, who listened as the officer told her about Carr’s dedication.

“He said, ‘I’ve got this nice kid in my car. He’s a great kid, he’s been walking all night to get to your house,’” Lamey told The Washington Post. “That’s when the tears started coming. I just started crying.”

Carr zealously got to work on the move, and as they chatted, Lamey felt like she’d known him for years. Remaining cheerful the whole time, Carr even played ball with Lamey’s sons, after he worked hard loading the truck.

“I just can’t tell you how touched I was by Walter and his journey. He is humble and kind and cheerful and he had big dreams!” Lamey wrote in a lengthy, appreciative Facebook post. “I am in total awe of this young man!”

Lamey was so touched, she set up a GoFundMe campaign to raise $2,000 for Carr’s automotive repairs. She then called his boss and retold her incredible experience with her new friend, leaving them both in tears.

The next day, Luke Marklin, who is the chief executive of Bellhops moving company, validated Carr for his work ethic by handing over the keys to his own 2014 Ford Escape, saying that it would be put to better use in Carr’s possession. 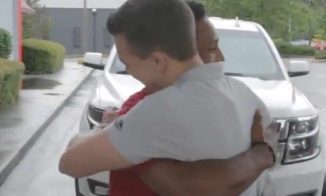 The video of the surprise gift has been shared thousands of times and people around the world are praising Carr for his inspiring personality. Lamey’s GoFundMe page has now raised over $60,000 and counting, and she hopes to maintain a friendship with the young man for the years to come.