Home All News Inspiring He Aims to Solve Hunger in Chicago by Bringing Food Waste Down... 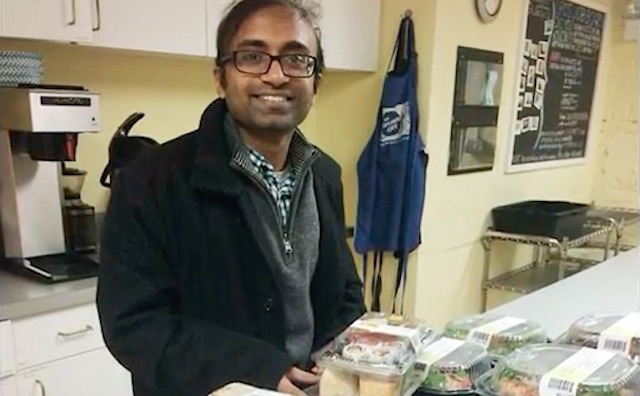 It started with a simple question.

As a graduate student at the University of Illinois at Urbana-Champaign in 2012, Raj Karmani, the founder of Zero Percent, was a regular at a neighborhood bakery. The store was always fully stocked with more than a dozen different bagel flavors, and that got Karmani thinking. “I wondered, ‘When all those beautiful bagels are made fresh each day, what happens to the ones that don’t sell?’” So Karmani asked the bakery’s owner, and learned that he did his best to donate what he could to area nonprofits. Still, many of those bagels were thrown out at closing time. Karmani vowed to change that.

Then a computer science student, Karmani first built the app that would become Zero Percent during a hackathon. “Technology is going to be the core of this solution,” he says. Zero Percent’s app allows restaurants, schools and other institutions that sign on to easily note what kinds of food they have available and in what quantity, and when they would like to have it picked up. The system then notifies a local nonprofit, giving them the option to pick up the food. In Chicago, where the startup is based, Zero Percent also hires drivers to make daily, pre-scheduled pickup and drop-off runs.

That a city like Chicago would have such a need for surplus food initially surprised Karmani, who grew up in Pakistan. “Coming to the United States, I felt I came to a country that is the richest and most powerful country in the world, and that I had left poverty and hunger behind,” he says. But his conversation with the bakery owner opened his eyes to two huge problems in the U.S.: the dual issues of hunger and food waste. “Forty percent of the food produced in the United States goes to waste,” Karmani says. That translates to more than $22 billion worth of prepared and perishable food every year. “That’s why we named the company Zero Percent,” he explains. “We wanted to bring that statistic down to zero percent.”

Restaurants and other businesses pay a fee to participate in the program. In return, Zero Percent streamlines the process of donating excess food. “It’s just a great way to know that we’re feeding others who need it,” says Jon Naylor, a managing partner at Blackwood BBQ in Chicago. It’s a morale-booster for staff, and they mention it during interviews with new potential hires, Naylor says. Customers also like to hear that the restaurant is giving back to the community, he adds.

MORE: Tesco to Give All Unsold Food to Charity in its 800 UK Supermarkets

The participating institutions can also gain financial benefits. Zero Percent’s functionality includes a dashboard that shows them exactly what they’ve donated and where their donations have gone. This makes it easy for them to document donations for tax purposes. It also helps them track how much excess food they’re ordering and making, so they can make their operations more efficient. “We had a lot of lettuce leftover at the beginning,” says Timothy Muellemann, a manager at Sopraffina in Chicago. “Since we began using Zero Percent, we’ve been able to see the items that we had been ordering too much of, and it’s helped us keep that in check,” he says.

The benefits for local nonprofits are obvious — fresh, healthy, prepared food they can serve to those who need it most. Besides going to soup kitchens and food pantries, Zero Percent provides surplus food to after-school programs and organizations that serve underprivileged populations. “What’s amazing is that we get so much fresh, nutritious food from Zero Percent,” says Kylon Hooks, a program manager at Chicago’s Broadway Youth Center, which primarily serves homeless LGBTQ youth. Hooks says that getting healthy food from a high-quality source has an emotional benefit too. “It gets young people to think, ‘I’m worth eating this way,’” he says. “Zero Percent is an invaluable resource.”

CHECK OUT: SuperMeat Promises Real Meat With No Harm To Any Animals

Since its launch in 2013, Zero Percent has distributed more than 1 million meals to almost 150 nonprofits in the Chicago area. But Karmani has his sights set on bigger goals. “I firmly believe that food waste can be entirely eliminated,” he says. “I’m still striving to reach that utopia of zero food waste. I’m not going to congratulate myself until we have, step by step, shown that we can move the needle on food waste, first in Chicago, and then elsewhere.”

The 2016 AllStars program is produced in partnership with Comcast NBCUniversal and celebrates social entrepreneurs who are powering solutions with innovative technology. Visit NationSwell.com/AllStars from November 1 to 15 to vote for your favorite AllStar. The winner will receive the Tech Impact Award, a $10,000 grant to help further his or her work advocating for change.

Reprinted with permission from NationSwell