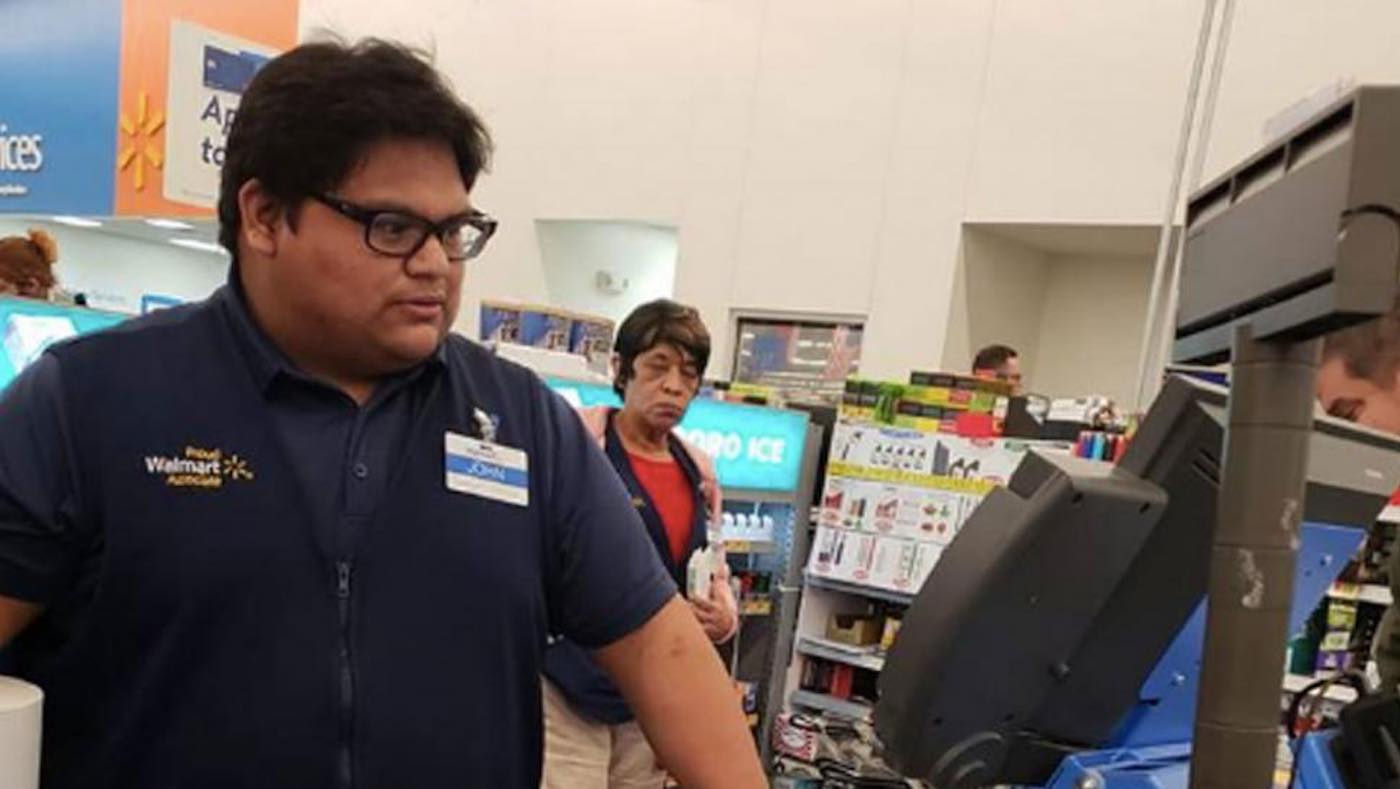 A 19-year-old Walmart cashier was more than happy to pick up the tab for a distressed woman who was unable to pay for her groceries – so his community decided to thank him for his kindness.

The young man’s good deed was captured by Laci Simms, another shopper who was waiting to check out from the store in Princeton, Texas.

A woman ahead of Simms became frantic when she realized that she did not have enough money to pay for her $110 grocery bill – but her cashier, John Lopez Jr. volunteered to pick up the tab.

Simms was so impressed by his kindness, she snapped a picture of the youth and posted it to Facebook – although this is apparently not the first time that John has inspired his customers.

RELATED: Homeless Veteran Asks for Nothing, But Town Insists On Helping Him Anyway

“I just witnessed this ‘kid’ pay for a cart of merchandise for a woman in obvious distress about her inability to pay,” wrote Simms. “She was a few people ahead of us and when she had trouble paying her bill, he stepped in and told her if she’d wait, he would pay her total. Ya’ll, it was $110 dollars!”

“If you have never had the pleasure of going through John’s checkout line at the Princeton Walmart, please seek him out on your next visit,” added Simms. “He is always singing, upbeat, courteous, joyful and efficient.

“He just renewed my faith in humanity and the generation we are raising! Everyone share this so the world knows what a blessing John is to our community!”

As more and more people shared the photo, fellow shoppers contributed their own stories of praise for the young cashier. One local user, Brandon Weddle, recognized John in the photo and was particularly touched by the story.

“I’ve been through his line a couple of times, my wife has too, and we’ve spoken about him, how he touches people on a daily basis,” Weddle told Inside Edition.

After reading all of the other testimonials to John’s characters, Weddle says that he could not stop thinking about how he finally wanted to do something to thank John for his kindness. “It just resonated with me the whole next day,” he said. “I’d asked on Facebook if anyone had set up a [crowdfunding] page for him, but there wasn’t one. With it only just being a few days before Christmas, I decided to set up a page for him.”

In addition to being honored by his manager and the town mayor, John also had the bulk of the crowdfunding donations transferred into his bank account this week – and the emotional youngster says that he plans on using the money for college.

“He was very excited and you could tell it meant a lot to him and his family. You know it’s going to a good family,” Weddle told Inside Edition. “I’m just glad that he got recognized this year, and I’m glad the community stepped up to help him.”