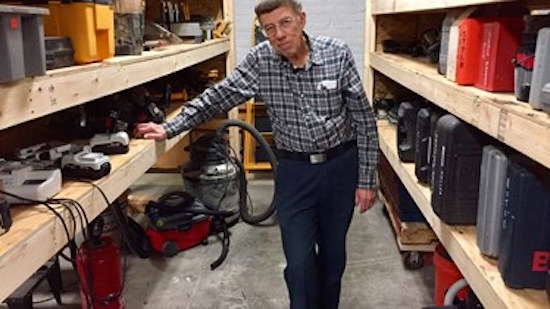 This library of tools wouldn’t have half of the collection that it does today if it weren’t for Dave Merry.

The St. Paul Tool Library in Minnesota is a membership-based service that allows anyone to check out tools, workshop space, and materials for a monthly fee. The organization helps people save money and space, as well as alleviating carbon emissions by creating less demand for new tools.

Except that when the library first opened their doors in March, they didn’t expect many people to help kickstart their mission by responding to their call for tool donations.

Dave, who had been amassing his tool collection for years, donated it all in a single day.

The 78-year-old had to move into assisted living due to his wife’s health – and he couldn’t bear to part with all of his tools just because of the lack of space.

RELATED: Retired Senior Gets Job After Posting Ad About ‘Dying from Boredom’

So in turn, the senior donated his tools – and his expertise – to the library.

His vast knowledge of craftsmanship has proved invaluable to the members – not to mention his tools make up most of the library’s inventory.

The donation also comes as an homage to his brother George, who passed away at the age of 21 when Dave was just 15. Dave feels that – by helping other people – he is inspiring the community the same way that his brother did for him.

“It just meant a lot to me do something with wood and know that George would have done it too,” Dave told KARE11.

(WATCH the video at Kare11 news)