Home All News Animals Hope on Horizon for Escaped ‘Russian Spy Whale‘ After Video of Its... 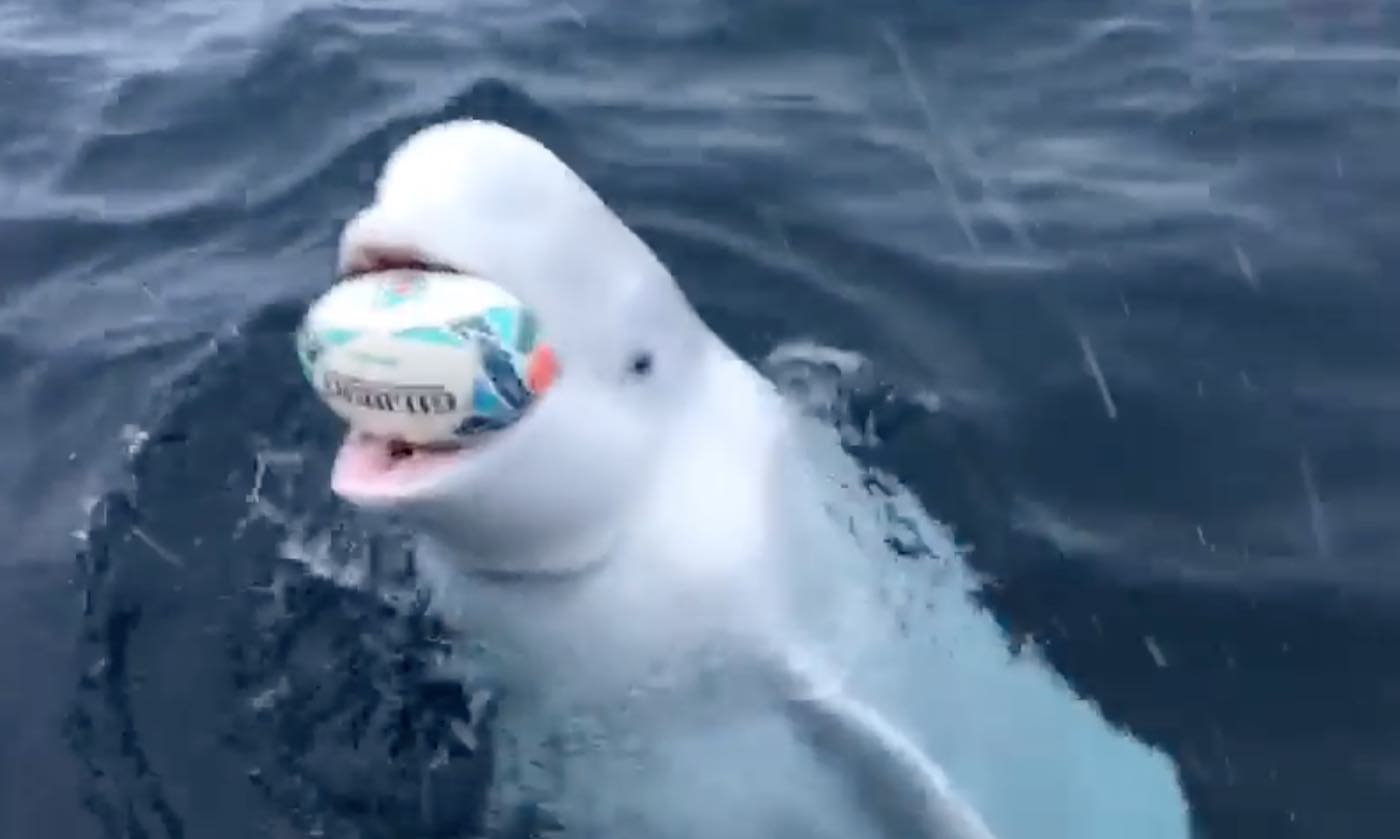 Over the course of just one week, this video of a “wild” beluga whale playing fetch with a group of sailors has been watched more than 20 million times—and while many viewers have been blissfully unaware of the whale’s plight, the viral footage could help to save it.

Hvaldimir the beluga was first spotted by fishermen off the coast of Norway back in April. The sailors were already suspicious of the whale’s origins based on how comfortably it interacted with the humans. Furthermore, they discovered that it was wearing a GoPro camera harness with the English words “Equipment St. Petersburg” printed on the label.

Marine mammal training facilities were common during the Soviet Union reign, and since its release, Hvaldimir has become world renowned as the defected “Russian Spy Whale”.

This is not the first time that Hvaldimir the beluga has been recorded interacting with humans. Shortly after locals became aware of the whale’s presence, Hvaldimir was filmed returning a woman’s phone after she had dropped it into the chilly sea waters from a boat.

LOOK: This Woman and Her Pet Otters Have Spent the Last 40 Years Protecting the Species From Extinction in England

Many conservationists have shunned the more recent viral video as a whimsical depiction of a grim situation—but its online fame has helped to create hope for Hvaldimir on the horizon.

For the last three months, Advocates for Hvaldimir has been keeping track of the cetacean’s activity in order to make sure that he is faring well on his own. Regina Crosby, who is a co-founding member of the group, says they are now working with two other environmental groups to try to relocate Hvaldimir to a different oceanic region so he can potentially reintegrate with a pod of belugas for a better chance at survival.

WATCH: Bison Get 22,000 Acres of Additional Prairie Land to Roam Free – Watch The Spectacular Moment They Were Reintroduced After 150 Years

Crosby, who has spent the summer filming a documentary about Hvaldimir, says: “As advocates for Hvaldi, we realized this whale would never have the chance at survival, let alone a normal life, unless he is given the chance to be with a pod.

“There are folks that claim no pod will accept him, but those same folks would claim a captive beluga can never learn to eat on their own. As Hvaldi has proven—that is not true!” she added. “There are many many cases of orphaned or displaced dolphins and whales who join pods—even pods other species—to become a family. He deserves a chance.”

CHECK OUT: Watch ‘Superhero’ Woman Rescue Trapped Deer From Not One, But Two Different Fences in a Matter of Minutes

Crosby and Advocates for Hvaldimir have since begun collecting donations from the beluga’s internet fans in order to finance his relocation. Since the Norwegian government recently granted permission to the wildlife advocates to relocate the famous cetacean, they are now hoping to continue working with legislators to transport Hvaldimir this winter.

“The ‘good news’ for now is that we have created a GoFundMe page with specific details about his situation,” Crosby told Good News Network in an emailed statement. “It is really important to note that we are NOT working with ANY organizations who are involved in keeping whales or dolphins in captivity, or using them for entertainment; and we are not receiving funding from those companies.

“We do have a lot of things worked out, but it is in the whale’s best interest if specific details do not become too publicized,” she added.

(WATCH the viral rugby video below)