Home All News Inspiring Humble Waitress Who Sliced Ham for Senior is Rewarded For Her Kindness... 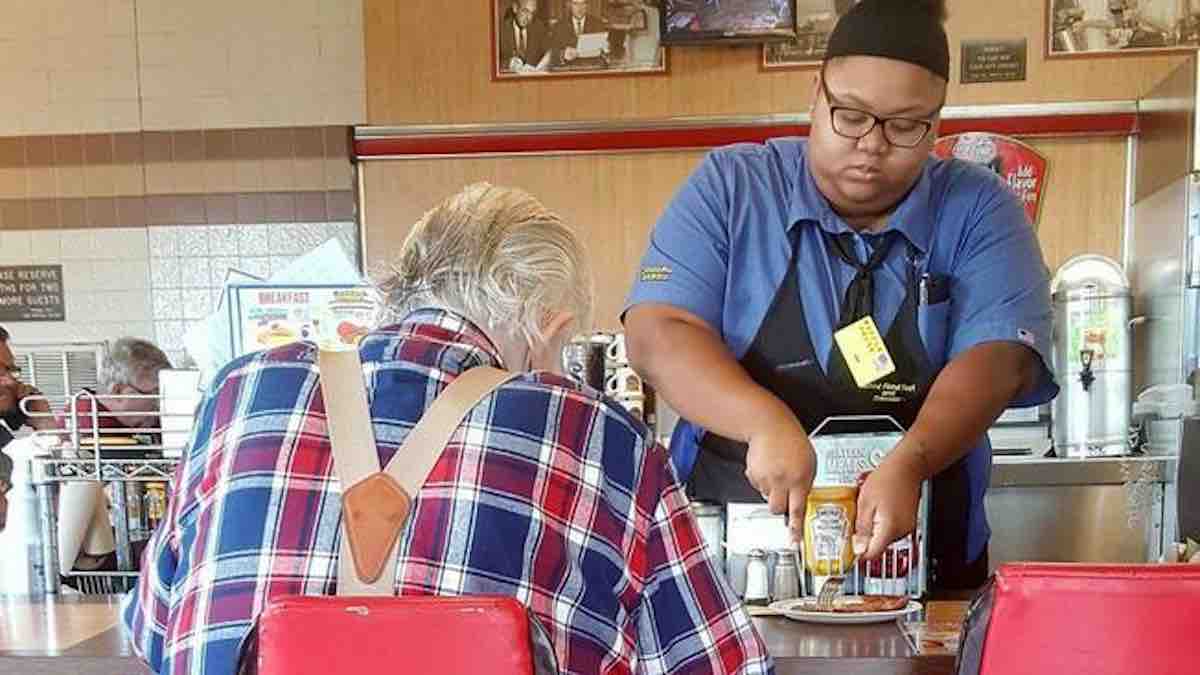 LISTEN to this Good News Guru story broadcast on radio with Ellen and Geri on KOST-103.5 – or Read the story below…

It was just another day of work for Evoni Williams when a stranger snapped a photo of her that would change her life.

18-year-old Williams has been working at a Waffle House restaurant in La Marque, Texas since she graduated high school. She has been saving up all of her tips, earnings, and wages to pay for college.

Williams was working a chaotic morning shift when a partially disabled customer named Adrien Charpentier asked if Williams could cut up his ham.

The senior says that he has recently been experiencing muscle weakness in his hands, and though he can hold a fork perfectly, he can’t properly use a knife to cut up his food.

MORE: When Old Dog Won’t Play With Anything But Discontinued Toy, PetSmart Folks Don’t Give Up

Despite the hectic work environment, Williams said that she was more than happy to oblige.

As she was cutting up the ham, another patron at the restaurant witnessed the sweet exchange, snapped a photo, and posted it to Facebook where it was shared thousands of times.

The photo garnered so much attention that it eventually caught the eye of La Marque Mayor Bobby Hocking.

RELATED: Random Company Will Pay Man’s Drunken $1,600 Uber Fare As Thank You For Not Drinking and Driving

“Somebody tagged me and it immediately, it just touched my heart,” Hocking told KTVI. “It’s so wonderful that the younger generation cares about the older generation.”

As a means of thanking the young lady for her kindness, Hocking declared that March 8th was Evoni “Nini” Williams Day. Not only that, but officials from Texas State University rewarded the humble Waffle House server with a $16,000 scholarship for the school.

Williams, who was brought to tears by the generosity of her city, says that she plans on studying business and management at TSU.