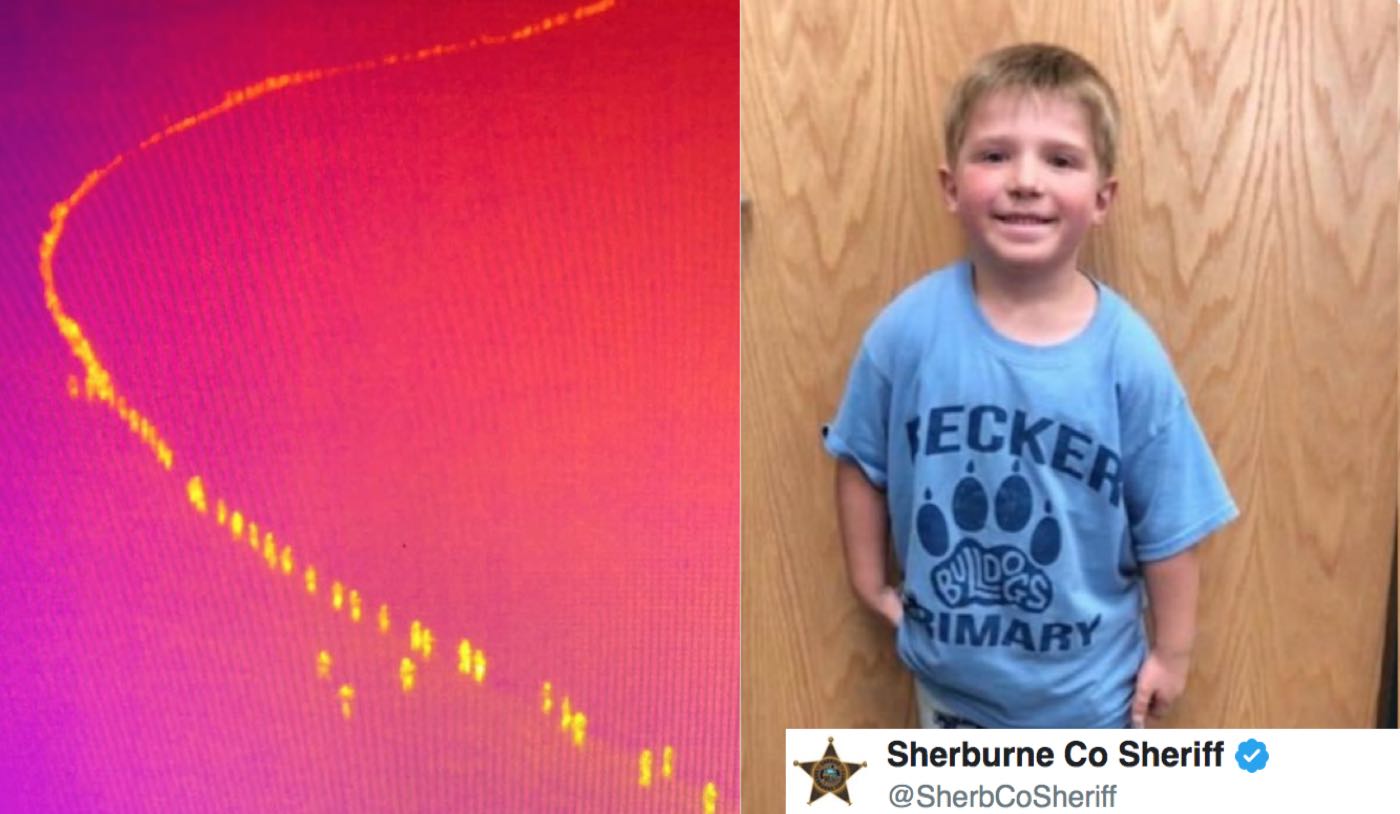 A 6-year-old walked away from his Minnesota home with his dog as the sun was setting and, after hours of temperatures dropping, the worried Sheriff’s Department needed help—and hundreds of citizens in Sherburne County heeded the call, including a man with an expensive piece of hardware.

Steve Fines was scrolling through Twitter and saw the official tweet announcing that a boy was missing. Fines lived nearby and knew that the neighborhood was filled with “cornfields and swampy woods with ankle-deep water”, not ideal conditions for finding a child in the dark.

His company, Fines Imaging, owns a heat-seeking drone, so he headed to the scene where 600 volunteers had turned out to search for Ethan and his dog.

A little before 11:00, Fines posted on Facebook, saying his $30,000 thermal camera “lets me cover lots of wet ground that people can’t walk easily,” but admitted that he’d had “no luck yet.”

The Washington Post says he uses the drone to help farmers find runaway livestock by pinpointing their body heat.

It was about 30 degrees in Palmer Township, but skies were clear.

While Fines was running the camera in the dark, he took an astonishing photo that showed a long line of bright spots, showing all the people out in a field getting ready to walk across in a search pattern—literally hundreds of people in wet, muddy ground, in freezing temperatures at 1:00 a.m. because they wanted to help.

“I only knew in which direction to look because volunteers on the ground had found a footprint that pointed me in the right direction. I knew which areas had already been searched because of the excellent coordination of the Sherburne County Sheriff.”

At about 1:50 a.m., a little more than a mile to the east of his home, Ethan Haus and Remington were found lying down shivering in the field when the drone spotted their heat signatures. Fines knew it was a dog, because of his career experience spotting deer and other animals.

RELATED: Lifeguards Were Just Learning to Use New Rescue Drone When They Saved Boys Trapped at Sea

Ethan was cold but was otherwise in good health, according to the Sheriff Joel Brott.

“This truly was the epitome of a community caring for its own,” Brott said. “To see the outpouring of support in such a short time period to come out and help find this boy and his dog is heartwarming.”

The Sheriff posted the drone photo from Fines Imaging depicting the endless line of volunteers, which elicited heartwarming praise and gratitude.

One volunteer who was in the cornfield commented on how the drone was able to expand the limited line of sight available to those on the ground: “You brought your talent and equipment to do something for the greater good. A state patrol helicopter spent 6 hours on site, but you made it happen.”

“I wish I could hug and personally thank every single person that was there because it truly was amazing! No one ever gave a up hope including you… You will forever be in our hearts as we are so grateful that you could be such a big part of helping us get him home! Thank you again from the bottom of our hearts!”

Searching For The Meaning of Community? SHARE This Story as the Answer…