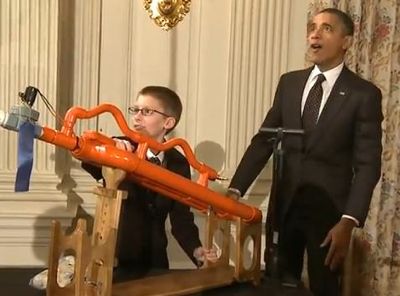 Who says science can’t be fun?

At the second annual White House Science Fair last week, President Obama got the chance to shoot a marshmallow across the State Dining Room using 14-year-old inventor Joey Hudy’s “Extreme Marshmallow Cannon.” Hudy designed and built the machine, which can launch the fluffy white confections up to 175 feet away using pressurized air.

“This is great!” exclaimed Obama, as the two pumped up machine using a tire pump. “The Secret Service is not too happy right now.”

The White House Science Fair featured research and inventions from more than 100 students. From robots in the Blue Room to rockets in the Red Room to marshmallow cannons in the State Dining Room, projects showcased the talents of America’s next generation of scientists, engineers, inventors, and innovators. One girl has even designed a targeted cancer treatment using nanotechnology.

Samantha Garvey, 18, of Long Island, N.Y., was on hand for the event after gaining media fame last month when her family received help after its eviction from their home. The newly homeless girl was given a place to live for her family from local social services after winning a spot on this year’s Intel Science Competition. Her environmental science project examines the effect of pollutants and predators on mussels.

Taylor Wilson, 17, of Reno, Nevada (pictured below) showed off his research on novel techniques for detecting nuclear threats and developed an environmentally friendly, cost-effective, and highly sensitive system capable of detecting small quantities of nuclear material. 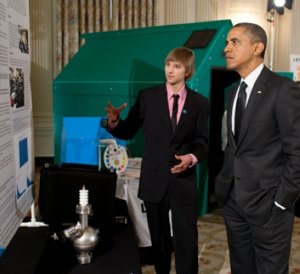 After viewing some of the displays and talking with students about their work, the President addressed students, parents, and teachers in the East Room.

“When students excel in math and science, they help America compete for the jobs and industries of the future,” said President Obama. “That’s why I’m proud to celebrate outstanding students at the White House Science Fair, and to announce new steps my Administration and its partners are taking to help more young people succeed in these critical subjects.”

Hudy, from Phoenix, Arizona, maker of the Extreme Marshmallow Cannon  — and an LED Cube Microcontroller Shield — has started a small business to sell his inventions.

Read about all the science projects in the WhiteHouse.gov press release.