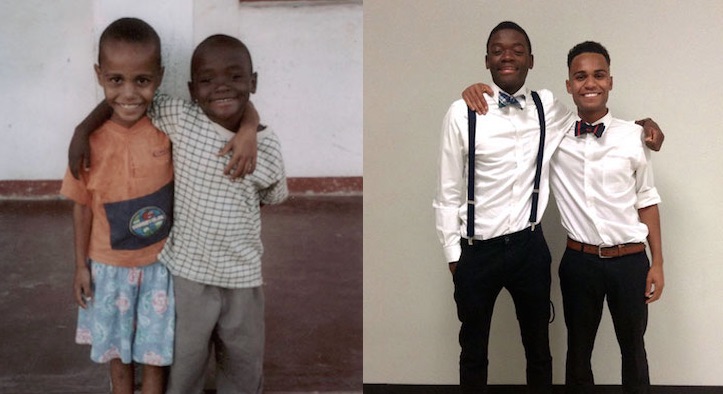 In terms of BFFs – “best friends forever” – there may be no more perfect real life examples than Kelvin and Alfonso.

Their lives growing up in Mozambique were nearly identical, two young kids with parents who died of AIDS, then orphans supporting each other through the hardships of having no family.

RELATED: Woman Tracks Down Sperm Donor, Falls In Love With Him, And Marries Him

Then, two miracles side by side: the boys were both adopted at 10-years-old separately by American families in 2008–families living in the same town of Gilbert, Arizona.

“The only way this makes sense to me is that there was a higher plan for our friendship to last,” Afonso tells People. “I needed Kelvin back in Mozambique, because we relied on each other for comfort. And I can’t explain it, but it just made sense that he would end up in Arizona too.”

Once the parents of the families discovered their adopted sons’ childhood friendship, they arranged a surprise reunion.

The now 18-years-old buddies have been inseparable ever since; they went to the same high school, both played varsity soccer, and both accepted to Brigham Young University in the fall.

Both want to continue their education so they can help the people of Mozambique, particularly making adoptions easier for future parents of the many orphans like them back home.