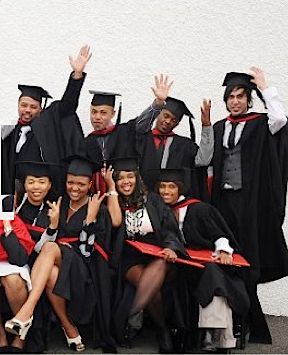 A unique, not-for-profit business school in South Africa recently held its fifth graduation ceremony. Their students are not required to pay for their education monetarily, but rather to ‘Pay it Forward’ by transferring the knowledge, skills, and resources into their communities.

Since its first classes in 2004, 760 students have been awarded full scholarships to the private Tertiary School in Business Administration who would otherwise be unable to access higher education. The accredited school’s goal is to ignite student opportunities to enlighten the world as leaders and entrepreneurs. It has produced four Mandela Rhodes scholars, awarded to African students who display academic excellence and broad leadership potential.

TSiBA has also developed over 200 enterprises on a pro-bono basis through its Ignition Centre in Cape Town, including eight IT centers in the township areas of greater Cape Town.

On July 20, 31 TSiBA graduates were capped for achieving their Bachelor of Business Administration degrees in Entrepreneurial Leadership. Former Minister of Finance for South Africa, Trevor Manuel spoke to the graduates.

“It’s so wonderful to see an organisation like TSiBA grow and flourish.  TSiBA students are so committed to making South Africa better, they are conscious citizens and walking examples of ‘Paying it Forward’.”