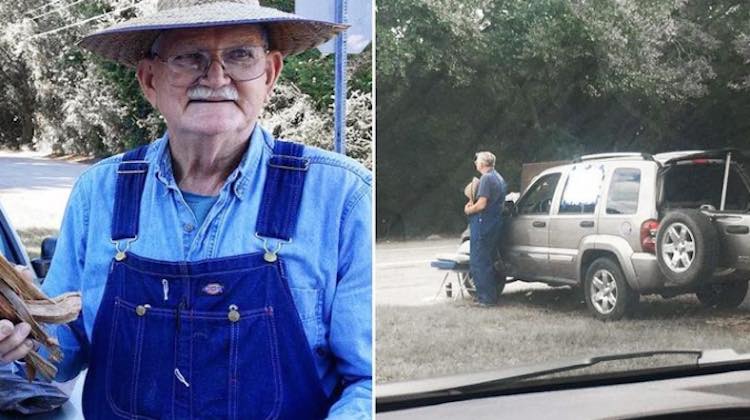 80-year-old Kenneth Smith was distraught enough when he recently lost his wife Helen to a drawn-out fight with cancer – but then the medical bills wiped out their savings and money.

So for the last year, Kenneth has been standing in the same spot on the side of the road selling kindling for $5 a bag.

Gulfport, Missouri resident Jessica Pittman empathized with the senior after continuously passing his little outpost on the street.

Touched by the widower’s kindness to strangers, she created a Facebook post requesting locals to support him and buy his wood.

“Last year he was there selling as well but he had his sweet little wife Helen with him,” wrote Pittman. “He was selling to help pay for his wife’s doctor visits and bills. This year he is alone. He said Helen lost her battle to cancer a few weeks ago and he is still selling to cover pay for her doctor bills.”

“My heart breaks every time I pass him. He waves at every single car that passes. On Friday, I was at the stop sign as a funeral procession was passing by. And he was standing alert with his straw hat over his heart.”

RELATED: Touched By His Story, Passenger Raises Thousands so Driver Can See His Son in Olympics

After seeing the Facebook post, Kenneth’s daughter Leslie created a GoFundMe for people who weren’t able to buy the kindling.

Someone of relation to Kenneth named Becky Stewart commented on the page with his reaction.

“My dad just came by and he is as nervous as a cat on a hot tin roof. He said he ‘hoped people did not think he was begging for money.’ I told him people thought he was inspiring. He has always worked hard,” Becky wrote. “Thanks so much for the donations your outpouring of love is what I find truly inspiring.”