Home All News Health Thanks to Student’s Hunch, Seniors With Dementia Are ‘Coming Alive’ Again With... 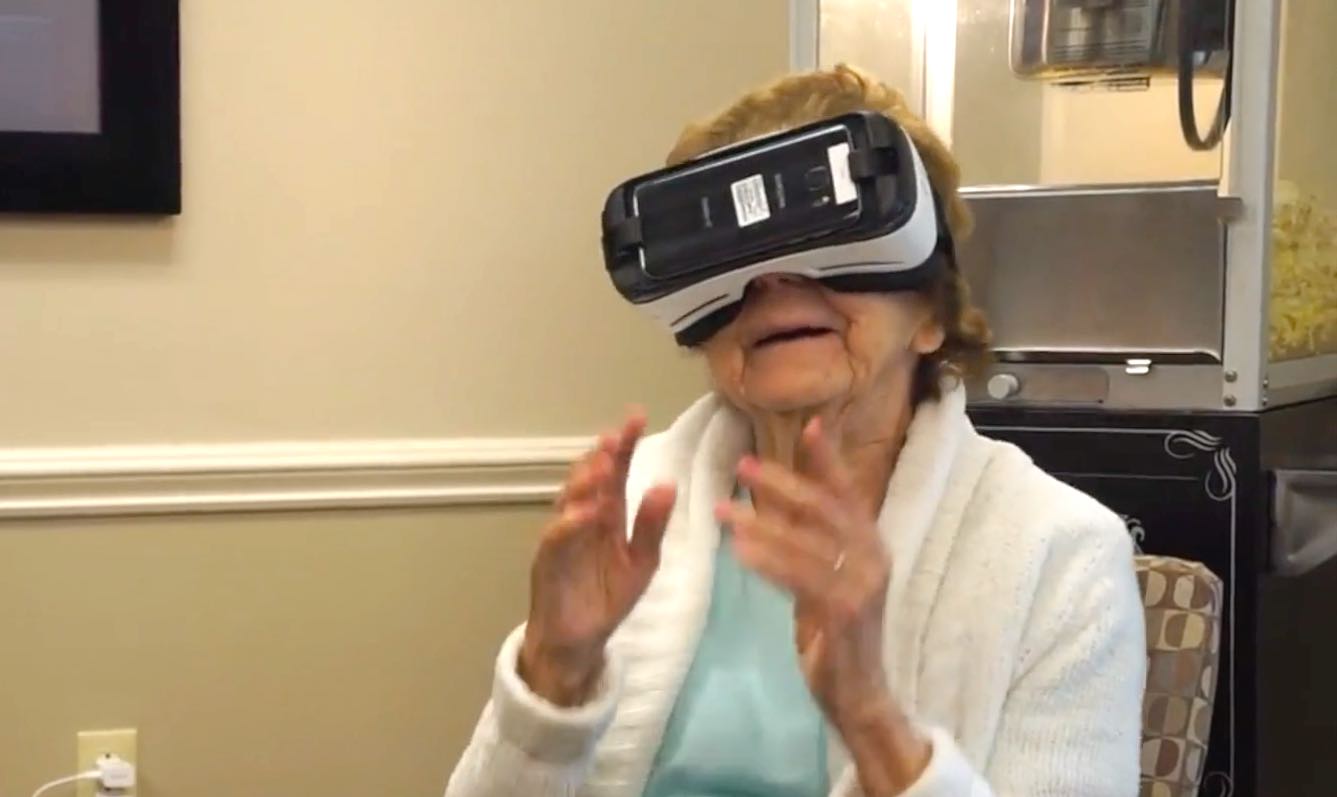 As Reed Hayes stood inside an assisted living facility in front of an elderly man struggling with dementia, he wasn’t quite sure what to expect.

The man sat slouched in his wheelchair, unmoving, his eyes barely open. Hayes had enrolled in MIT’s Sloan School of Management with the idea of helping older adults overcome depression and isolation through the immersive world of virtual reality. Now he needed to test his idea.

Hayes turned on a virtual reality experience featuring a three-dimensional painting by Vincent Van Gogh and a classical piano playing in the background. Nervously, he placed the headset on the man. What happened next stunned everyone in the room.

“He just came alive,” Hayes remembers. “He started moving around, tapping his feet, laughing. He was all of a sudden much more engaged in the world, and this from someone who was slouched over, to now kind of bouncing around. [My classmate] Dennis and I looked at each other like, ‘Holy cow, we might be onto something.’ It was remarkable.”

It would not be the last time Hayes and Dennis Lally saw the transformative impact of virtual reality (VR). Their startup, Rendever, has since brought its VR experiences to more than 100 senior living communities, and has launched in hospitals to extend the enthralling world of VR to patients of all ages.

“Starting Rendever was one of the most important things I’ve done in my life,” Hayes says. “It holds a special place in my heart, and it’s probably the most material impact I’ll have in my life.”

Rendever’s main product is its resident engagement platform, which offers users a variety of games and activities like virtual scuba diving and hiking, and includes content from diverse sources that let users travel almost anywhere in the world. One of the most important features of the platform, though, is its ability to sync to multiple headsets at once, prompting social group activities.

“It’s amazing to see them point things out to each other and engage with one another, yelling ‘Look left!’ Or ‘There’s a puppy at our feet!’” says Grace Andruszkiewicz, Rendever’s director of marketing and partnerships. “Or, if they’re in Paris, someone might say, ‘I was in Paris in 1955 and there was this cute café,’ and people start adding details and telling their own stories. That’s where the magic happens.”

The company, which uses off-the-shelf headsets, also offers a family engagement portal so relatives can upload personal content like photos or videos that let users relive fond memories or be present in places they can’t physically be in. For example, family members can borrow a 360-degree camera, or purchase their own, to take to weddings or on family vacations.

The idea for the company was first sketched out by Hayes on a napkin at a university café as part of a pitch to Lally shortly after they’d come to MIT. With the help of two other MIT students, they officially launched the company in the fall of 2016.

Since then, everyone at the company has racked up a series of unforgettable memories watching older adults use the platform. Lally remembers one early test when they gave an older woman the experience of seeing the Notre-Dame cathedral in France.

“She was so ecstatic to be able to see this church from the inside, something she had dreamt about, and we were able to kind of fulfill a lifelong dream of hers,” Lally says. Indeed, the company says it specializes in helping seniors cross items off their bucket list.

Rendever’s team adds original content to its platform twice a month, much of it based on feedback from residents at the communities that subscribe to the service. Subscriptions include headsets, a control tablet, a large content library, training, support, and warranties.

The company also helps nursing homes deliver personalized content to their residents, which makes for some of the most powerful experiences.

LOOK: Young Man Invites Solitary Senior to Eat With Him and Discovers She is a Widow On a Special Anniversary

“Once there was an older adult who just kept saying ‘I want to go home,’ but she was in an assisted living community because she was showing signs of dementia,” Hayes remembers. “With the technology that we’d built, we were able to type in the address of her home and take her there. And she started crying tears of joy. She kept saying, ‘This is the most beautiful place in the world.’”

Now the company is working to reproduce in clinical trials the results they’ve seen with individual clients.

A study performed in conjunction with the MIT AgeLab and presented at the 2018 International Conference on Human Aspects of IT for the Aged Population compared social VR experiences for older adults with watching the same scenes on a television. The researchers found that the people who had shared these experiences through VR were significantly less likely to report depression or social isolation and more likely to feel better about their overall well-being.

“To this day, the power of the shared experience remains at the heart of our philosophy, and we owe much of that to our roots at MIT and ongoing collaboration with the MIT AgeLab,” says Rendever CEO Kyle Rand.

CHECK OUT: Though Her Alzheimer’s Worsened, Supermarket Still Found Creative Ways to Keep Her on the Team

Rendever is also deploying its system outside of senior living communities. A study with UCHealth in Colorado used Rendever’s VR as a distraction for patients undergoing unpleasant treatments such as chemotherapy. After the program, 88 percent of participants said they’d use VR again.

The system has worked so well that many of Rendever’s employees have used it with their own aging relatives. Before Andruszkiewicz accepted a job at the company, she asked if she could take a demo set to her 89-year-old grandmother.

“She started telling me stories that I’d never heard before, and she and I have a really close relationship, so it was surprising that some of her memories had come back,” Andruszkiewicz says. “That sealed the deal for me.”

Factors such as quality of life and mental stimulation have long been suspected to influence impairments related to aging. Rendever’s team is hoping the transformations they’ve seen can be replicated through peer-reviewed research. One particular transformation sticks with everyone.

For years, an elderly woman named Mickey was the most outgoing and friendly person in her Connecticut assisted living community. She knew everyone’s name, was a regular at community events, and always had a smile on her face.

Then she was diagnosed with dementia. One of her first symptoms was expressive aphasia, a disorder that robbed her of her ability to speak. Mickey’s silence left a void in the community and saddened residents and staff members.

Then Rendever’s team came in to do training. A staff member, with tears in his eyes, told the team about Mickey, so they cued up a scene of golden retriever puppies and put the headset on her.

“She completely lights up,” Andruszkiewicz recalls. “Mickey was trying to pet the puppies, and calling them over, and she was talking throughout the experience.”

From a clinical perspective, it’s too early to say that VR improves symptoms related to aging, but when Rendever followed up with the Connecticut community six months later, they learned something interesting: Mickey had continued using Rendever, and continued communicating with old friends who never thought they’d hear from her again.

Mickey's Story from Rendever on Vimeo.