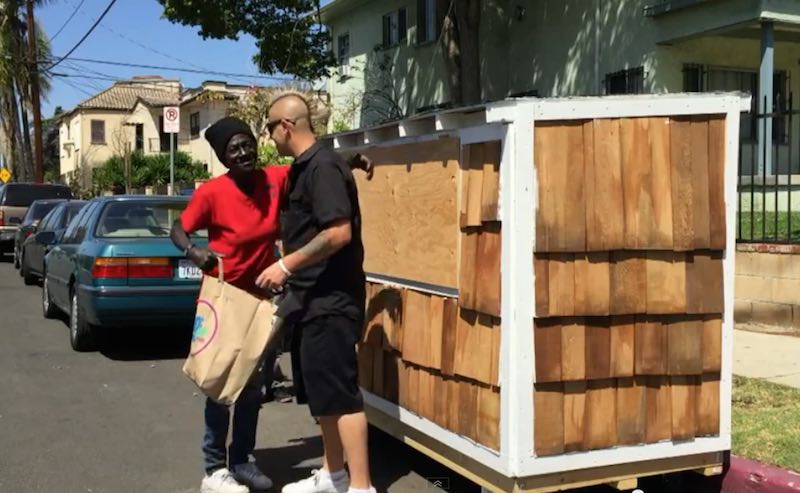 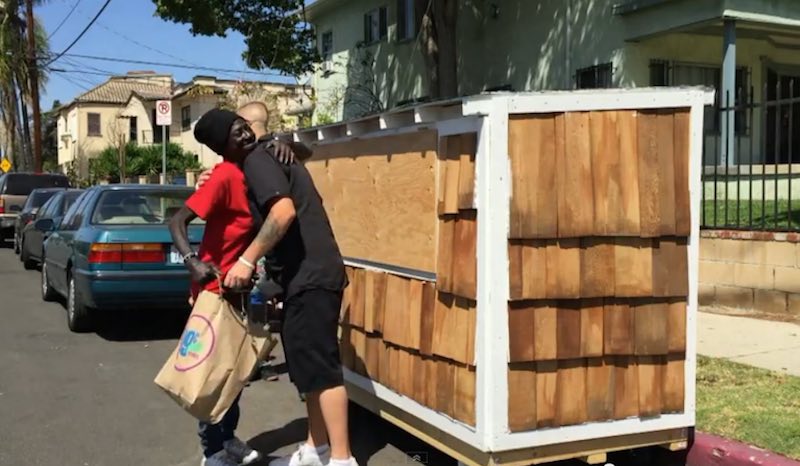 A 60-year-old homeless woman named Smokie has been sleeping outside in the dirt a few doors down from a man named Elvis Summers.

Most mornings, she stops by Elvis’s Los Angeles apartment and asks if he has any recyclables for her. Through these conversation, they struck up a friendship.

One morning, Elvis saw a news article about a man in Oakland who has been making tiny houses out of discarded material. He was inspired to put off paying a few bills so he could buy the lumber and hardware to make Smokie a brand new shelter. It took him five days to build, and now, for the first time in ten years, Smokie has a place to hang the sign, ‘Home Sweet Home.’

“I had nowhere to really build it, so I just built it in the street outside of my apartment,” he told Good News Network. “The local LAPD cops have been super cool, and have told me they support it–as long as we move it to a different spot every 72 hours.”

He made this nifty time-lapse video showing how he did it. The materials, including two locks on the front door and sturdy wheels for moving it around, cost him about $500.

“I’ve met so many homeless people, good people,” Elvis said in an email. “Since I built Smokie’s, I’ve had several people ask me to make them a tiny home and it’s turned into much more than just the one house I wanted to build.”

Although he runs an online retail store that sells EDM apparel, he decided to launch an ambitious project to fund more shelters. He plans to get lighter and cheaper materials—without sacrificing the strength of the house—for the next round. Rick Sassen, branch manager at supply company Allied Building kindly donated the roof shingles and cedar siding for Smokie’s house, final items Elvis couldn’t afford on his own. Sassen has promised to work out a deal on future building materials for the same cause.

Thus, the spikey-haired do-gooder has launched “Mythpla” (My Tiny House Project LA) with a crowdfunding campaign for those who want to help, on GoFundMe.

“I’d like to offer purpose to these people in need and hire them to build the houses with me. I’ve even set an appointment with LA’s Mayor Eric Garcetti to try and get his help,” said Elvis. “The city owns or controls many properties which are just sitting collecting dust and could be used, even temporarily, to help save lives.”

Because Summers qualifies for a free phone through the free phone program, he’s given his device to Smokie and helps her keep it charged. She has been using it to contact her family.

“Now if I could just get her to stop using the radio on the phone so much, it wouldn’t always be dead and need charging so often,” he said laughing. 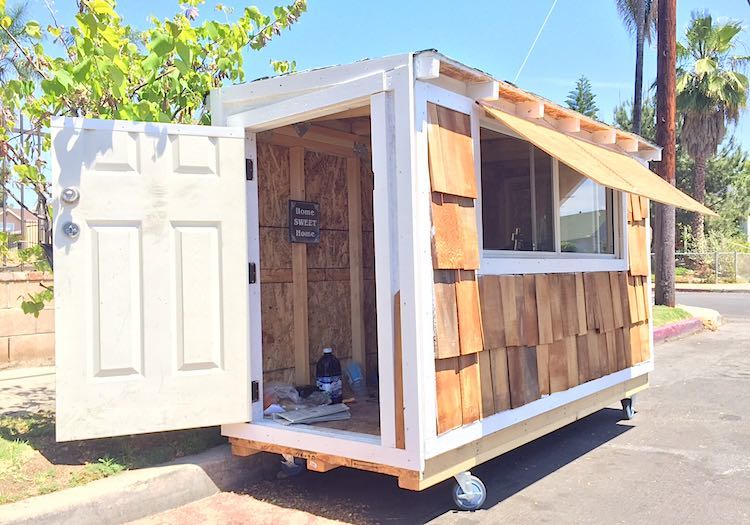