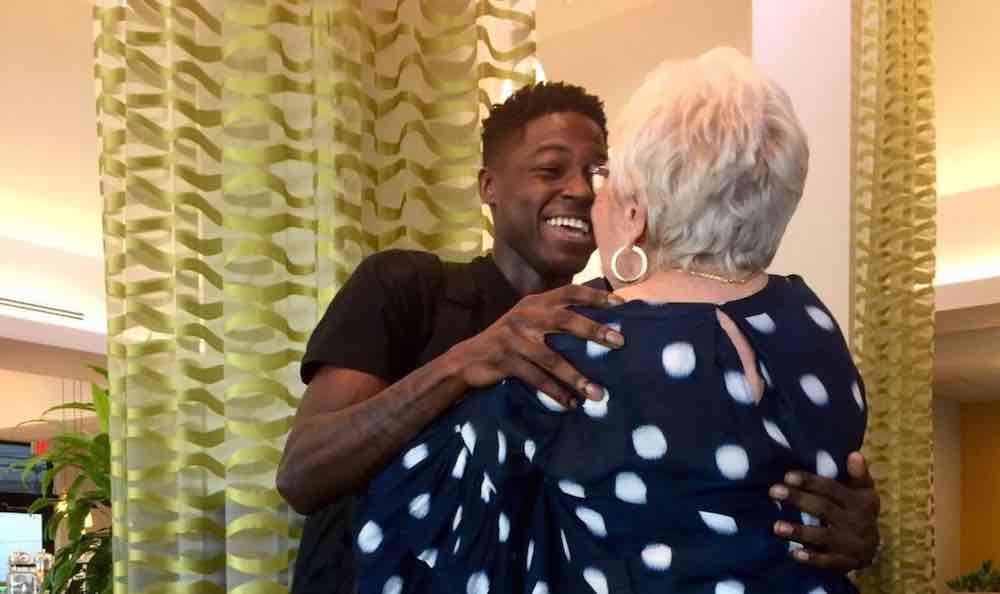 A picture speaks more than a thousands words – and these two individuals are particularly good with words.

22-year-old Spencer Sleyon and 81-year-old Rosalind “Roz” Guttman have spent the last year developing a friendship built on their rivalry in the crossword puzzle game, Words With Friends. Then, last week, they came together in person for the first time.

Considering Sleyon is an aspiring young rapper from Harlem, he is not the mostly likely counterpart for Guttman: a senior resident at a West Palm Beach retirement community in Florida. But since the app first paired them as opponents, the two have battled in over 324 games of wit.

Over the course of their virtual competition, the two would send messages to each other with criticism, compliments, and chit-chat. As the months passed, the senior and the youngster became close friends.

When Sleyon mentioned his unique online friendship to his pastor Amy Butler, she was thrilled by the sweet story. Butler asked if she could use the story of their friendship in her sermon about how “relationships change us”.

After giving the sermon, however, Butler wanted the story to take one step further—she wanted Sleyon and Guttman to meet each other in person.

LOOK: These Little Athletes Glued to Their Phones Are Not Ignoring Each Other Like Adults Assume

Sleyon and Butler confirmed a meet-up with Guttman, booked their tickets to Florida, and hopped on the plane.

Butler snapped a selfie with the musician and tweeted it with the caption reading: “She’s 86 and lives in a retirement community in Florida. He’s 22 and lives in Harlem. They met online playing #WordsWithFriends. Tomorrow they’ll meet in person. I get to be there. #RelationshipsChangeUs.”

The Words With Friends Twitter page responded, adding to the avalanche of emotional reactions across the internet. Their response to the social media tale read: “We can’t get enough of this! Amazing. Thank you for sharing your story with us.”

Butler was able to snap some sweet photos of the moment Sleyon and Guttman first laid eyes on each other.

After posting the pic, the young man tweeted, “Life is…crazy, I’ve never [even] been to Florida, y’all.”

Judging by the expressions on their faces, it looks like words finally failed them.

Spell It Our For Your Friends: Click To Share The News With Your Friends (Photos by Amy Butler)