Home All News USA For the First Time in History, America’s Renewable Energy Capacity is Now... 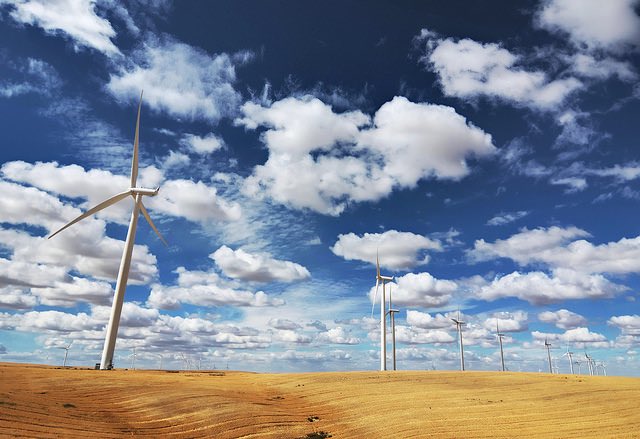 Despite how the United States has endured ongoing political tensions in the face of climate change, this exciting new report says that the nation is actually becoming greener than ever.

According to an analysis by the conservational group SUN DAY Campaign, newly-added electrical generating capacity from renewable energy sources – such as biomass, geothermal, hydropower, solar, and wind – has now surpassed that of coal for the first time in history.

The analysis, which was based on the latest monthly “Energy Infrastructure Update” report from the Federal Energy Regulatory Commission (FERC), notes that 18 “units” of new wind capacity (1,545 MW) and 102 units of new solar capacity (1,473 MW) were added during the first four months of this year.

Coupled with four new units of hydropower, the renewable energy’s share of all available U.S. generating capacity was pushed up to 21.56%. By comparison, coal’s share dropped to 21.55% (down from 23.04% a year ago).

This all being said, capacity is not the same as actual generation. Capacity factors for nuclear power and fossil fuels tend to be higher than those for most renewables. For calendar year 2018, the U.S. Energy Information Administration (EIA) reports that renewables accounted for a little more than 17.6% of the nation’s total electrical generation – that is, a bit less than their share of installed generating capacity in 2018 (over 21.2%). Coal’s share of electrical generation in 2018 was 27.2%.

FERC’s data also reveals that the nation’s renewable energy capacity has been adding, on average, one percentage point each year. That is, a year ago, it was 20.66%; three years ago, it was 18.16%. The share of the nation’s generating capacity provided by utility-scale solar alone has more than doubled during the past three years from 1.42% to 3.23%. Meanwhile, wind’s share has increased from 6.43% to 8.25% and is now on track to surpass hydropower (8.41%) within the next few months.

Moreover, the same report indicates that by May 2022, proposed “high probability” generation additions and retirements could result in a net increase in renewable energy capacity of 40,993 MW. By comparison, net capacity by nuclear, coal, oil, and natural gas combined could actually decline by 24 MW; that is, retirements would exceed additions.

CHECK OUT: Nation’s First ‘Hempwood’ Factory Could Be Sustainable Lifesaver for Endangered Oak Trees in the US

Further, if FERC’s projections prove accurate, in three years, renewable energy sources will provide nearly one-quarter (i.e., 24.15%) of the nation’s total available installed generating capacity with wind alone accounting for over a tenth (10.01%) and solar at 4.32%. The balance will be provided by hydropower (8.16%), biomass (1.33%), and geothermal (0.33%).

The report is an exciting follow-up to an international report that was released in April showing that renewable energy now accounts for one-third of all global power capacity.

Power Up With Positivity By Sharing The Good News To Social Media – Photo by D.H. Parks, CC