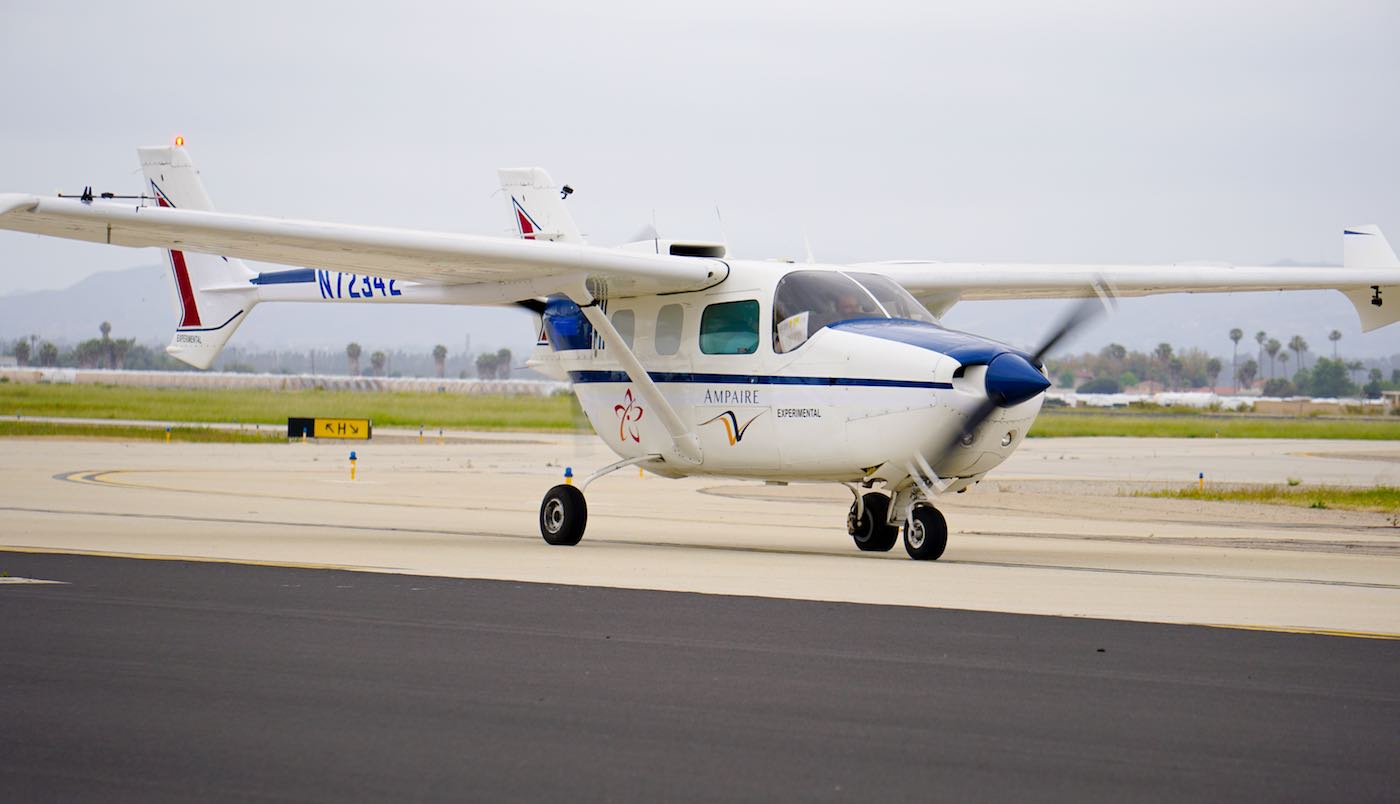 Environmentalists have high hopes for the future of air travel after the highest-capacity hybrid-electric aircraft recently took to the skies in California during its first ever test flight.

This is a significant step for aviation because a hybrid-electric aircraft this of this size ever flown before. Ampaire’s 337 is built with a direct path towards commercialization—moving electric aviation firmly from futuristic to attainable.

The aircraft, which was designed by Ampaire Inc., was retrofitted with Ampaire’s proprietary electric propulsion system and is powered by a lightweight battery system.

The battery-powered electric motor replaces a combustion engine of the aircraft’s original two-engine configuration, and the resulting system is a “parallel hybrid”, meaning the internal combustion engine and electric motor work in concert to optimize power output as the plane flies. In hybrid configuration, the aircraft sees significant greenhouse gas emissions savings and operating cost reductions.

“The first flight of Ampaire’s electric passenger aircraft is a huge step forward for aviation,” said Deborah Flint, CEO of Los Angeles World Airports. “As a cleantech company that was started in our great city … Ampaire’s incredible achievement further cements Los Angeles as the leader in transportation electrification and technology innovation.”

Aircrafts are a significant contributor to both local and global emissions. Electric and hybrid-electric aircraft will reduce GHG emissions and air pollution even as more and more goods and people fly. Additionally, electric aircrafts are quieter, more efficient and cost much less to fly and maintain connecting communities, making skies quieter.

“Imagine that in just a few years you will be able to buy a ticket for a flight that is clean, quiet and inexpensive,” said Kevin Noertker, CEO of Ampaire. “Ampaire is proud to lead the aviation industry in transportation electrification, and we recognize the importance of electric aviation for climate change and community connectivity.”

“Given the urgency of the climate crisis, today’s historic flight not only signifies a huge step forward for aviation, it also shines a light on Los Angeles’s leadership in transportation electrification,” said Matt Petersen, CEO of the Los Angeles Cleantech Incubator (LACI).

Ampaire has mapped a clear path from today’s first test flight of a prototype to commercial operations in 2021. This week’s test flight follows the Federal Aviation Administration (FAA) May 2019 airworthiness approval to begin a flight test program. The test flights will see the aircraft fly multiple times per week from June through August 2019 and will gather data about the electric propulsion performance characteristics.

In late 2019, Ampaire will begin a pilot project on a commercial route on the Hawaiian island of Maui. The aircraft will be a newly retrofitted Cessna 337 built with learnings from the test flight program that inform the configuration of the battery and motor. This aircraft will be a pre-production prototype and will move Ampaire closer to commercial readiness.

Furthermore, Ampaire has signed Letters of Interest with 14 other airlines from around the world.

(WATCH the April news coverage below)