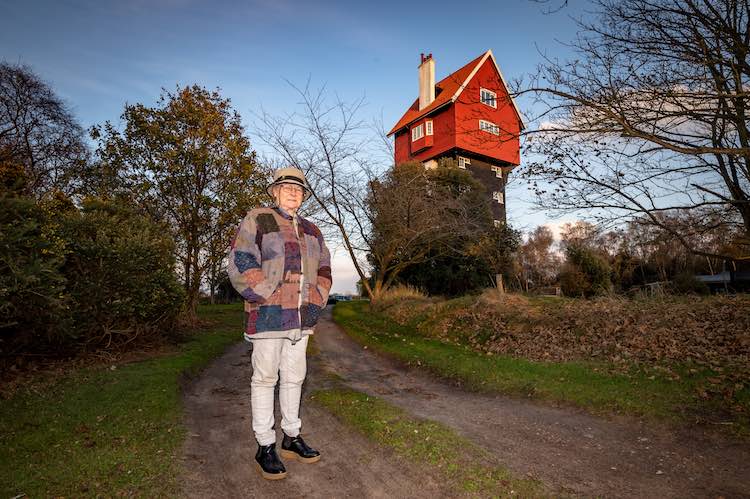 The stunning “House in the Clouds” is one of Britain’s tallest cottages and towers 70 feet above the surrounding landscape.

The 1920s structure was originally designed to hide an old water tower in the village, and included housing at the bottom for children’s author and poet Malcolm Mason.

Today it is the “fairytale home” of Sylvia Le Comber who has filled its interior with dozens of intricately crafted fairy dolls.

The fairies are scattered all around the house as a tribute to Mrs. Mason who featured them in her writings.

The 78-year-old, who actually uses the “fairy house” as her home, said: “I have changed very little since I bought the house in 1976. The house looks exactly as was in 1922.”

The 5-story-tall home provides five bedrooms – two with double beds, three with twin beds – three bathrooms, drawing room, dining room and one room at the top where the water tank holding 50,000 gallons had been located.

There is also one acre of private grounds surrounding the home, in Thorpeness, Suffolk which includes a tennis court.

The structure was built in 1923 to provide Aldringham Mill with water but was turned into a family home with impressive views across the Suffolk Coast.

The house was originally converted for Mrs. Mason by the Ogilvie family – farmers who used to own the Thorpeness village. Sylvia, who is has now retired, said Mason authored a book filled with poems all about fairies. Granted the home by the Ogilvie family she lived there with her children, and named it ‘House in the Clouds’.

Mason wrote in her book about the home: “The fairies really own this house or so the children say. In fact, all of them moved in upon the same day.”

WATCH: This Jolly King Has Lived in His Sandcastle for the Last 22 Years

“It is funny because the number of fairies I have is constantly rising,” adds Sylvia. “More fairies keep arriving at the home, they just appear all of a sudden because someone has come round and dropped one off.”

“There is more than 30 fairies around my house all different shapes and sizes as well. There are so many I can’t keep count. People who come and stay find the fairies all over the house and it surprises me, as well, sometimes.

“It’s lovely, I have big giant mushrooms that have grown at the front of my house and they are for the ‘real’ fairies… Well, that is what I tell people.”

The grandmother of three says she is thankful to own a house which is a well-known landmark and says it is great for when her family comes to visit.

“All the children love the fantasy of the house, as they see the mushrooms outside the house and imagine the fairies flying to the mushrooms.”

Sylvia, who says she loves to continue to fuel the imagination of her young guests, adds: “It is quite an extraordinary house … It is lovely when the whole family comes.”

(WATCH the video to see the interior below)