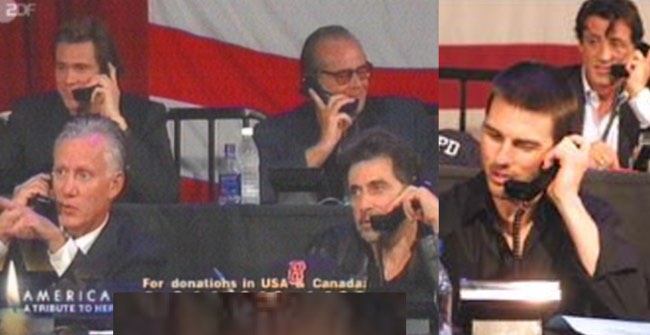 Just like after the 9/11 terrorist attacks (in the photo above), the A-list performers in Hollywood and New York are bringing their star power to rally financial support for the victims of the two monster storms affecting large swaths of the American South.

Hand in Hand: A Benefit for Hurricane Harvey and Irma will be a one-hour broadcast special airing live on ABC, CBS, CMT, FOX and NBC on Tuesday, September 12 at 8:00-9:00pm EST and replaying at 8:00pm on the West Coast. The LIVE show will also be streaming to world viewers on Facebook, YouTube and Twitter starting at 8:00pm.

These are some of the stars who’ve already signed up to participate with appearances, performances, taped tributes, and messages:

Houston native rapper Bun B was one of the principals in the creation of the show, after his hometown was hit by Hurricane Harvey — before Irma was on the horizon.

Hand in Hand will bring the country together to raise funds, spirits and help rebuild in the wake of unprecedented devastation. Proceeds from the telethon will benefit United Way of Greater Houston, Habitat for Humanity, Save the Children, Direct Relief, Feeding Texas and The Mayor’s Fund for Hurricane Harvey Relief (administered by the Greater Houston Community Fund). The Hand in Hand Hurricane Relief Fund will be managed by Comic Relief USA.

Phone lines, text messaging, and digital donations will be open at the beginning of the show and will conclude one-hour after the show ends. For more information, updates and a link to donate, please visit www.HandInHand2017.com.