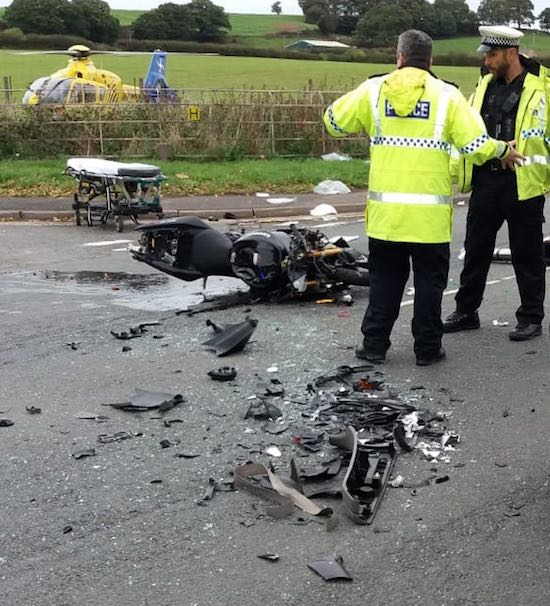 A motorcyclist was finally given the chance to thank the doctor who performed emergency open chest heart surgery on the side of the road.

Not only did the impromptu operation save the biker’s life, but it also enabled him to walk his daughter down the aisle on her wedding day.

John O’Brien was involved in the road traffic collision while he was out riding his motorbike in Delamere back in October 2018. Firefighters, paramedics and police were first to arrive on the scene followed shortly by Dr. Mark Forrest.

By this time, 47-year-old O’Brien had been skillfully anesthetized on scene by the doctors, but just prior to being loaded into the helicopter, he went into cardiac arrest and conventional resuscitation proved ineffective. As he lay in the road, things were looking hopeless, as such traumatic cardiac arrests are commonly described as un-survivable in medical circles.

LOOK: Farmer Saved Fox Cubs By Performing Emergency C-Section On Mother That Had Just Been Hit By a Car

Led by Dr. Forrest as the most senior doctor on the scene, the team of rescuers took up various roles. They pushed fluid into O’Brien through drips and his chest was de-compressed to try and get his heart re-started.

When there was no response to the treatment, the only option left was a drastic one: the doctors realized that they had to operate and open O’Brien’s chest in the middle of the road.

The team quickly tried to make everyone aware that they were about to do something rarely seen outside of a hospital operating theatre, but few would appreciate what was actually about to happen: the doctors completely opened O’Brien’s chest to expose his heart and lungs so they could perform treatment of his internal bleeding, lung injuries and to massage his heart back to life.

RELATED: Watch Quick-Thinking Bus Driver Stop Youngster Just As He Was About to Step in Front of Speeding Car

Incredibly within a matter of minutes, his heart was beating strongly and the bleeding had been controlled. He was quickly loaded into the air ambulance and flown to the Major Trauma Center at Aintree in Liverpool for further life-saving surgery.

The achievement was described by the rescue services as “a great demonstration of the standards of world leading emergency care now available in Cheshire, England.”

Dr. Mark Forrest is the medical director for the Cheshire Fire and Rescue Service and the founder of Internationally famous Anesthesia Trauma and Critical Care Group (ATACC) which promotes and widely delivers medical rescue training and clinical governance. He responds to 999 emergencies such as road traffic collisions on a day-to-day basis as part of his role with the rescue service.

He said: “I arrived at the scene and was managing another casualty when I noticed that the team was trying to resuscitate John, who had gone into cardiac arrest. Despite the huge effort by the doctors, paramedics, firefighters and police officers, nothing was working and it wasn’t looking good for him. I joined them at John’s side and, after a very quick discussion, we knew that … the only chance of saving this man was to open up his chest to manage his internal injuries and to massage his heart until it started beating. This is rarely successful, but we did want to at least try.

“John has undoubtedly played a big part in his own recuperation since then,” added Forrest. “He has obviously worked really hard to get to the level of fitness he is right now. It will have been a tough road to recovery so his determination is commendable.”

In fact, O’Brien has made such a remarkable recovery, he was able to walk his daughter Amy down the aisle for her wedding last month. 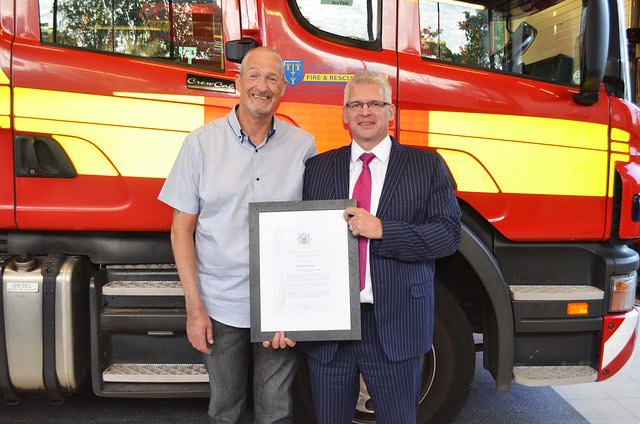 He was also able to thank everyone involved in his rescue at an evening reunion which was held at the Northwich Fire Station. Surrounded by the other doctors, firefighters, paramedics, and police, Dr. Forrest was given a commendation by the chief fire officer for his work that fateful day.

O’Brien said: “I can’t thank Dr. Forrest and everyone involved enough for helping me that day and for doing everything they could to save my life. I was lucky enough to be able to walk my daughter down the aisle recently and that’s all thanks to them.”