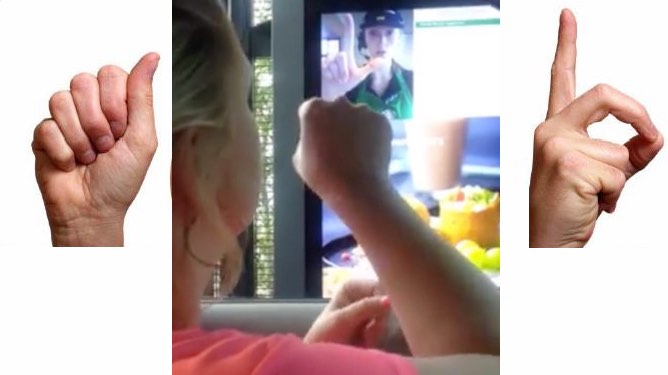 On Monday, a woman pulled up to the Starbucks drive-thru lane and was thrilled when a barista opened a video screen to begin talking to her in sign language.

When Rebecca King was asked for her order a few times but didn’t give a verbal response, an interactive screen was activated at the drive-thru window. The technology was a big deal to the woman because she had no other language with which to communicate at a distance.

The next day, when she pulled up to the same St. Augustine, Florida window and got the same barista screen, she recorded her exchange and posted the video to Facebook.

WATCH: Watch What Runners Do When Man’s Wheelchair Breaks Mid-Marathon in NY

“It is a big deal to (the) deaf community that Starbucks has one now. We all want to have that at every drive thru in the world,” King told First Coast News.

Starbucks is not the first to implement this kind of system: in 2010, Mid-western fast food chain Culver’s installed similar technology called OrderAssist at 50 of its drive-thrus, and Subway restaurants have also piloted touch-screens at a number of their U.S. drive-thrus.

As for this specific St. Augustine location, it’s not unusual that an employee might happen to know sign language: it’s located near the Florida School for the Deaf and Blind.

(WATCH the video below from Rebecca King’s Facebook Page)

Starbucks! This is what I'm talking about! ❤️Share it away! We can change the world! :)For Licensing/Usage Please contact licensing@viralhog.com