Home All News Inspiring Lost Hikers Rescued in Record Amount of Time, Thanks to Drone 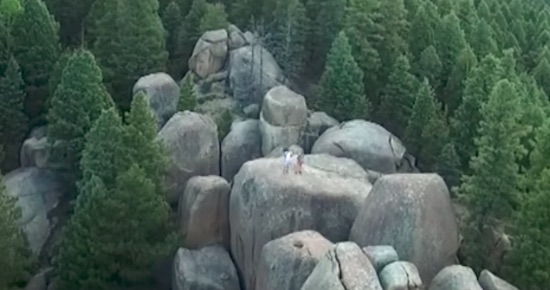 It can take all night for this mountain park’s search and rescue team to find missing hikers – but thanks to new drone technology, a recent search was over in a matter of hours.

The Douglas County Search and Rescue Team of Colorado were deployed on Thursday after two hikers and their dog found themselves lost in the woods of Devil’s Head mountain with their dog.

The distressed duo called 911 and requested help when they found that they had strayed too far from the trail.

WATCH: Drone Photographer Warns Surfers of Shark Circling Beneath Them

The team began searching on foot around 4:15PM. By 6PM, the drone had made visual contact with the hikers. The team then met up with the hikers and guided them back down the mountain, resulting in a successful 4-hour search and rescue.

“50 years ago basically everything was done by a group lined up in a straight line and just plodding through a field,” Commander Bruce Fosdick told KDVR. “Now, scientifically we try to plot out a lot more where the subject is. We use a lot of different assets. Dogs, drones, helicopters. We try to do a lot more with a lot less people and try to get it done a lot quicker.”

However, the rescue crew says that drones are astoundingly cheaper than helicopters, which cost about $2,000 per hour.

And after the successful search on Thursday, it’s safe to say that drones will now be a much more vital part of the team maneuvering the 29 mile area of Devil’s Head mountain.

Fly This Story Over To Your Friends