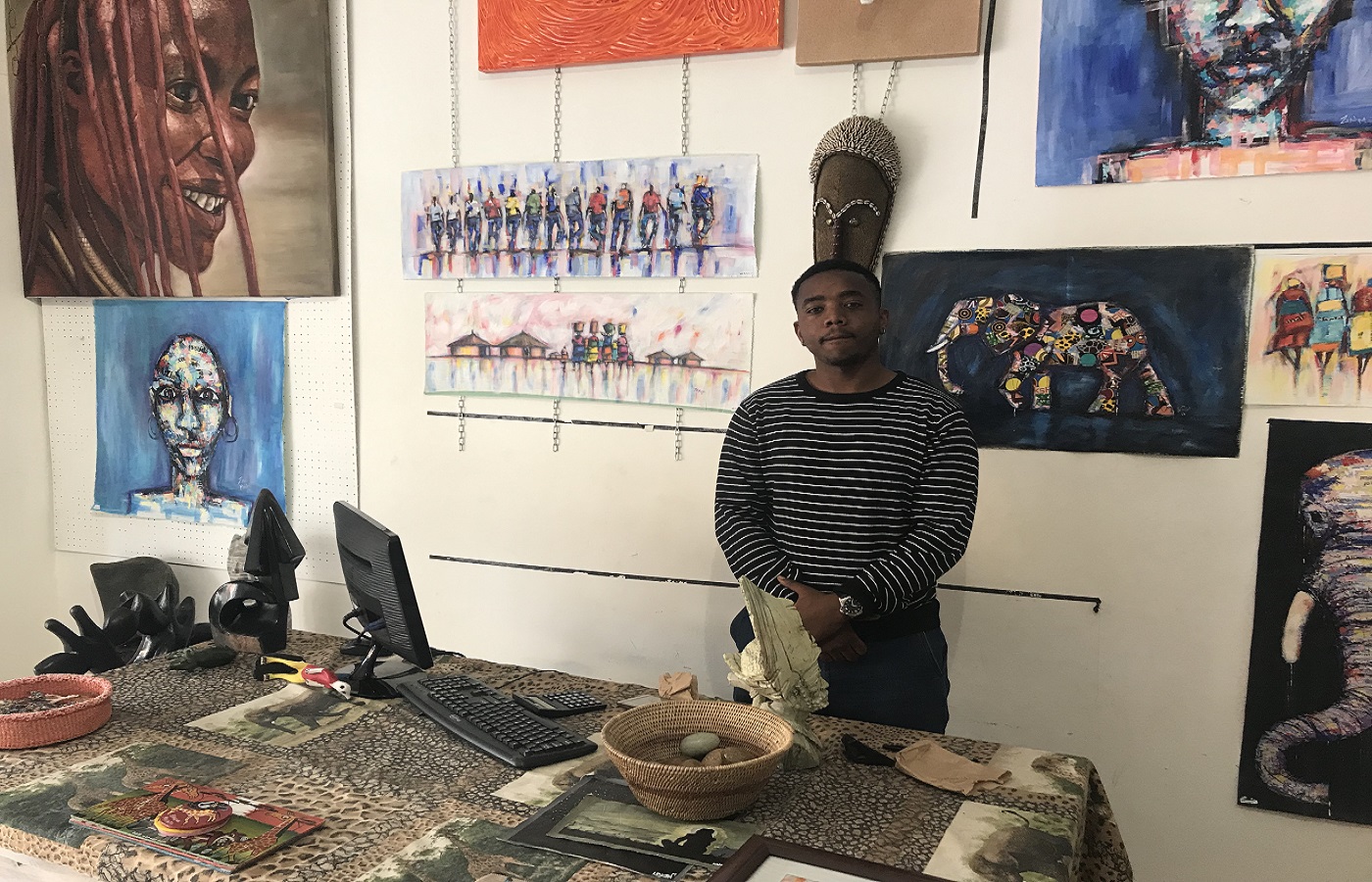 “A child on the street with nothing to do is a dangerous thing.”

The words echo back to American civil rights leaders like Martin Luther King Jr. or Malcolm X—and I heard them again after walking into a local art gallery in the Namibian beach town of Swakopmund.

The man behind the counter wearing pressed slacks and a thin-striped sweater, named Toivo, runs the shop where tourists can buy African-flavored art. Most visitors probably just have a quick look around, before heading across the street to get gelato at the Italian-themed eatery, but I find myself quickly engaged in conversation.

“What we do today, this is tourism. This is totally not something that a local person walks in and buys everyday,” he tells me, as our conversation drifts back from combatting poverty to his shop.

Now 25 years old, Toivo grew up on the streets of Namibia’s capital city of Windhoek, and described a rough upbringing that anyone from Baltimore, Chicago, or Detroit could easily relate to. He told me he used to be part of a nonprofit that tried and bring kids off the street and into donor-funded projects to give them confidence.

“The thing that destroys us, what really kills the whole thing is that we don’t try, we always have this certain negativity before us,” he says, showing me the pieces in his gallery. “In most of the country for people like us, employment is very seldom—maybe 48 to 49 percent.”

Namibia was owned by South Africa until 1990 when she won her independence. Swakopmund, where Toivo now lives and works, was a German colony until 1915. 100 years later, there is still a shocking disparity of wealth between the German neighborhoods and the black communities around them.

We stop at a sculpture of undulating wooden beams wrapped about each other and stretching 6 feet or more off the ground; Toivo’s recent piece.

“I’ve been working on this piece here. I call it The Rope. It’s the business bond, because if you pull here and here it makes two knots.”

A Sense of Meaning

Across Namibia, locals were keen to discuss with me the issues that make life challenging—like corruption, unemployment, and wealth disparity. Toivo recounted how, back before he opened his shop, he would specifically visit folks recently released from prison and offer to sell artistic pieces of theirs.

While he never detailed how he managed it one way or another, he seemed to suggest that he would contact people actually in prison and encourage them to pick up drawing, painting, sculpting, or something else creative, so that they had a chance to make something of themselves after their sentence.

“A lot of people’s confidence has been boosted since we opened the shop. There’s a lot of people that know ‘I’ve got something at the end of the day,’” he says. “A lot of what’s here is done by local artists.”

“Percentage-wise how often are these pieces made by people whose livelihoods depend on selling art?” I ask. He looks at the ceiling trying to come up with a number, fingers pressed together, before telling me “about 70 percent”.

Zin Maisiri is a local artist who does the abstract, richly colored pieces that cover the walls—elephants and giraffes made of cloth, newspaper, and thick globs of paint. “He is the reason we have survived.”

“The most important principality in business is discipline. If you don’t have the certain push, it’s not going to work,” he continued after my tour had been concluded. “It needs to start inside.”

It Needs to Start Inside

Toivo seemed as eager to talk about art as a business, as a method of giving meaning to people who have it only in rations, more so than art as an expression of self, the world, perspective, color, or anything else you might learn in an art history course.

I asked him if it was mainly to give an outlet to struggling black artists that he opened his art gallery.

LOOK: How a 97-Year-old Artist Used Doodles to Save His Beloved Hometown From Being Torn Down

“That as well,” he responded, always straight-backed and managing a swagger without motion. “But it was more like ‘let’s try this, let’s give it a shot and see where we’re at.’”

“It’s like when you dive in a pool of crocodiles—you don’t really care how they’re going to strike or not, you just dive in. You just take a chance,” he explains (although he was perhaps using a local metaphor that doesn’t particularly translate into English).

By now, we’ve exchanged email addresses and I regret that I don’t have the kind of disposable income to purchase marked-up art pieces; even though I would love to have a large stone springbok on my bookshelf in Washington D.C.

“If we sit back and relax and complain that we don’t got anything and this and that, the world is not going to feel pity for us,” Toivo says, again echoing the sentiments of black American figures like Malcolm X. “You can go out and compete. You’ve got a brain, you’ve got two hands.”

“I don’t have a degree, but I can make a piece that you can buy. So why not make a piece?”

“Most of the time you would rather do something than do nothing. Something’s always better than nothing, so why not try?”

It’s a powerful message, reflecting the powerful challenges that a young man has overcome in his life. But whether it’s Selma, or Swakopmund, it reflects the truth.