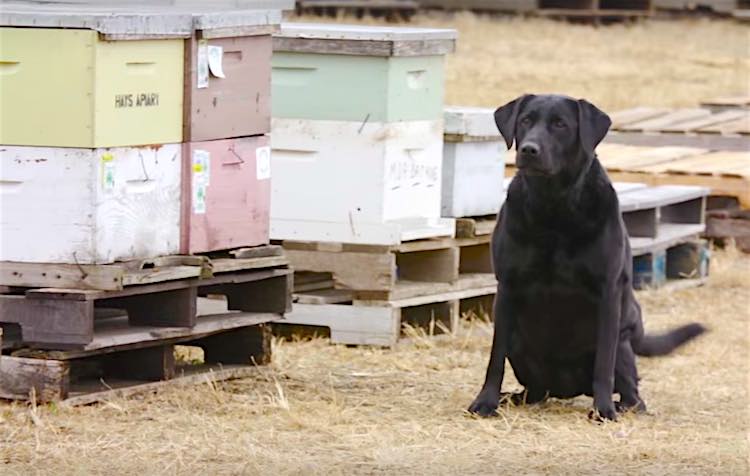 Klinker may look like any other black Labrador retriever, but she’s the only dog in America that can do this job — sniffing out disease and saving whole colonies of bees with one visit.

Since 2008, Klinker has been sniffing out American foulbrood — a bacteria that if not caught right away, can sweep through a colony, jumping from hive to hive and destroying any larvae. It’s the most common and destructive disease facing honey bees, but it’s no match for this dog’s nose.

Klinker can sniff out foulbrood in its earliest stages, allowing beekeepers to treat their hives with antibiotics to wipe out the disease before it can gain a foothold.

She works for Maryland’s Agriculture Department, running through rows of hives at a time, suddenly stopping and sitting when she catches a whiff of the bacteria.

Humans can inspect only about 50 colonies a day for the menace; Klinker can check up to 1,000 of them in the same amount of time.

Maryland began training “bee dogs” to sniff out diseases in the late 1970s. Klinker is the fourth in a long line of canines that have served as guard dogs for the state’s bee population.

WATCH: Give a Prisoner an Abused Dog and See What Happens – Karmic Connection

Her work won Klinker recognition from Milk-Bone as one of the ten “Dogs Who Changed The World” this year.

Oh, and don’t worry about her getting stung. Klinker’s work schedule is limited to fall and winter, when bees are docile — and not so worried about a dog sticking its nose into their business.

(WATCH the video below from National Geographic) — Photo: news video

Help Your Friends Sniff Out This Story, Share It…