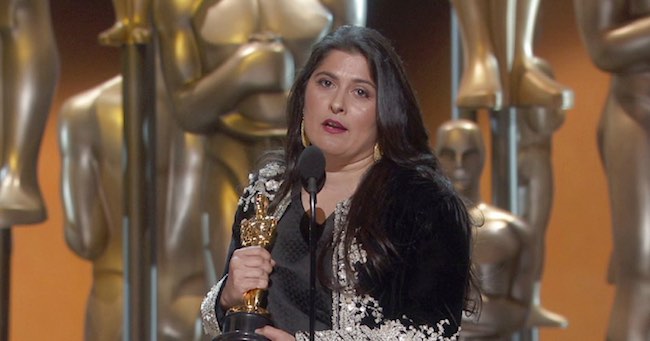 Amid the glitz and glamour of the Academy Awards on February 28, one deadly serious documentary was busy changing the world. Sharmeen Obaid-Chinoy took home the Oscar for Best Documentary Short Subject with her film, A Girl in the River, which took a hard look at so-called Honor Killings in Muslim countries.

“This is what happens when determined women get together,” exclaimed Chinoy, as she held up the golden statue, her second Academy Award.

She revealed that her film had been screened at the highest level of national government and had transformed hearts on the topic of cultural impunity for families who murder their own female members just because they broke social norms regarding marriage or love.

“This week, the Pakistani Prime Minister has said that he will change the law on honor killings after watching this film — that is the power of film,” she exclaimed.

A statement from Prime Minister Nawaz Sharif’s office in January offered congratulations to Chinoy, who also made history in 2012 when she won Pakistan’s first Oscar for another documentary.

“Honour killings, the theme of the film, afflict several segments of Pakistani society,” it quoted Sharif as saying.

According to the Tribune, he “expressed the government’s commitment to rid Pakistan of this evil by bringing in appropriate legislation”, the statement continued, adding that Chinoy’s “insights” could prove helpful.