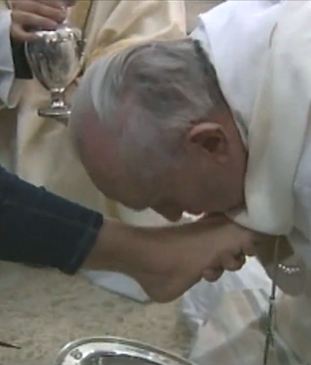 The day before Good Friday, Pope Francis continued what has been a ritual for him, but something no other papal leader before has done. He disregarded church tradition and washed the feet of two girls — a Serbian Muslim and an Italian Catholic — along with ten other young inmates at a nearby juvenile detention center.

While his predecessors washed and kissed the feet of priests in famous basilicas, Francis chose to kneel down before young offenders at the Casal del Marmo Penitentiary Institute for Minors, including two young women – the first time a pope included females in the Easter rite.

“He has washed the feet of the poor and inmates on most Holy Thursdays as a cardinal and archbishop in Argentina,” said one Vatican reporter. “What’s surprising is that, as a pope, he is the one going to the inmates, and not the other way around.”

(WATCH the video from the Vatican, and READ the full story from NBC News)