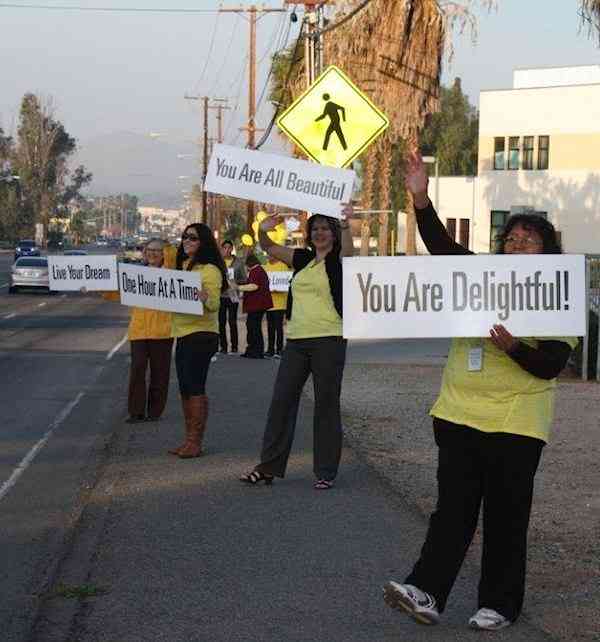 Honking horns, hundreds of smiles, and supportive waves were their reward as the teens learned the power of positive encouragement.

The youth were joined outside their school, Arlington Regional Learning Center, by staff, parents, and community members, who all took shifts during the 8-hour flash mob, in what was billed as a Happiness Sprinkling event.

“We had some kids that weren’t sure it was cool, but they totally got into it and some of them asked if they could stay out here all day,” said Joelle Hood, Principal at Arlington Regional Learning Center.

Police cars, fire trucks, tractor trailers, buses, cyclists, pedestrians, and thousands of passing commuters had their day brightened by the sign holders. One pedestrian said, “I never come this way, but I’m glad I did today. This is really cool—I really needed it.”

“A lot of people need this—even I needed it this morning.” said Jesse Porras, a student, who was reluctant, but joined the group when he saw them out in the morning.

One woman driving a pickup truck even pulled over to the curb and got out of her car to give hugs to the students. Local television stations interviewed participants at the event, for which planning began in November.

Started by Laura Lavigne in 2012, The Happiness Sprinkling Project often solicits surprised and puzzled responses from people being ‘sprinkled’ on their way to work/home. The signs, which help people tap into their own hopeful thoughts, are then used at the location of the next event. 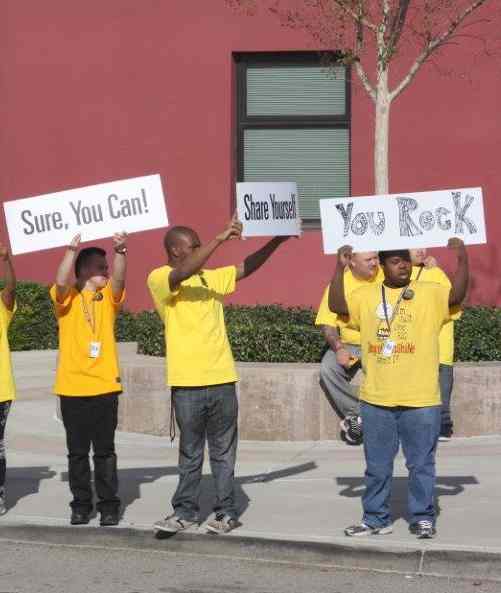 “It is just as important to teach ‘pro-kindness’ as it is to teach ‘anti-bullying’,” said Hood. “I want to give our students as many opportunities as possible to know how good it feels to give to someone else, to do acts of kindness, and feel part of something bigger than them, making this world a better place — and that they do have the power to make a positive difference.”

“The teachers here show so much love and respect to these kids,” said Patricia Walker, a parent. “I’ve seen a big change with many of them.”

“Some of the students here have made bad decisions, but they aren’t bad kids,” added the school’s Principal. “Today, they’ve had a chance to spread kindness to the community and each other and they are really excited.”