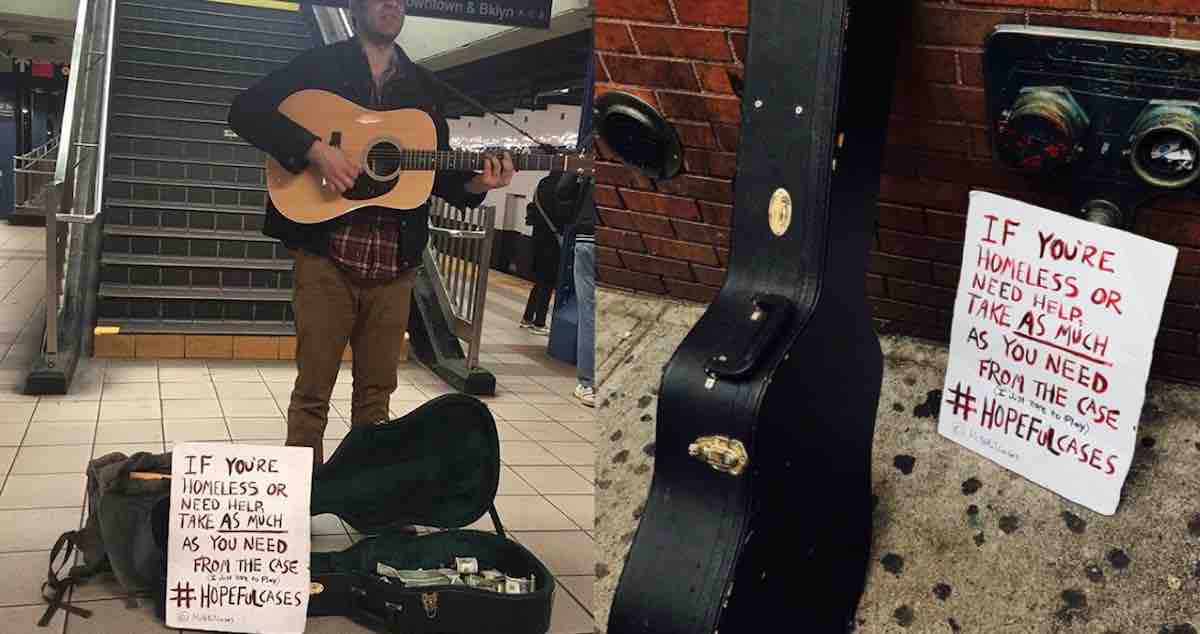 Many city dwellers have become immune to noticing homeless people on the streets – but this 28-year-old man felt compelled to do something about it.

William Boyajian first moved to New York City one year ago and became upset by the amount of rough sleepers he saw on the streets.

“When I moved to NYC from little ol’ Upstate New York, the issue of homelessness really bothered me,” Boyajian recounts. “These people in need are our neighbors and fellow New Yorkers, and I didn’t wanna ignore them.”

So instead of ignoring the problem, Boyajian took his guitar into the subway tunnels and started busking for money. However, the cash he received was not for him to keep.

The musician set up a sign next to his guitar case reading: “If you’re homeless or need help, take as much as you need from the case (I just like to play)”.

The nonprofit, which Boyajian launched last year, recruits artists, musicians, and entertainers to use street performing as a means of raising money for the homeless. According to him, the performances are a fun way to play and practice music – especially because “people don’t boo as much”.

“Right now, we have probably 2-3 other consistent performers in the city,” Boyajian tells Good News Network. “The beautiful thing about this project, however, is that people can jump in or jump out when they have the availability.”

Boyajian’s own artistic career kicked off in 2012 when he graduated from Ithaca College with a BFA in musical theater. The musician currently makes enough money from entertainment gigs to get by, so whenever he is not out of town for a performance, he is playing for Hopeful Cases.

“When I am in the city, I busk 4-5 days a week, normally for around 5 hours a day, or until my voice gives out whichever comes first. Singing in the subway without amplification takes its toll.

WATCH: Guy Shows How You Can Now Use Amazon Prime to Instantly Help the Homeless

Boyajian told GNN that one of the creeds of being a Hopeful Case performer is that they should avoid physically interacting with the money as much as possible – they should just try to keep performing until all of the money runs out.

“Sometimes though, it’s been 5 hours, and the money keeps trickling in and you never reach that zero balance,” he says. “In which case I will take the remaining money and walk the streets around Penn Station or Port Authority and hand it out to those sitting on the streets.

“This gives a really interesting opportunity to sit and talk with the people who are receiving the funds and hear their stories.”

WATCH: ‘Dancing Doctor’ in Boston Busks a Move to Raise Tips for Charity

In addition to sometimes saving money for specific projects, such as Metro Cards, socks, and school supplies, the charity is currently working on siphoning off some of the funds to make feminine hygiene products and toiletries available in the guitar cases during the performances.

“The point of this project was to change the way we think about giving, the homeless And poverty,” says Boyajian. “As anyone who lives in NYC or any major city knows, your options are either to ignore it, notice till it eats you up, or do something. This is what I thought I could do.”