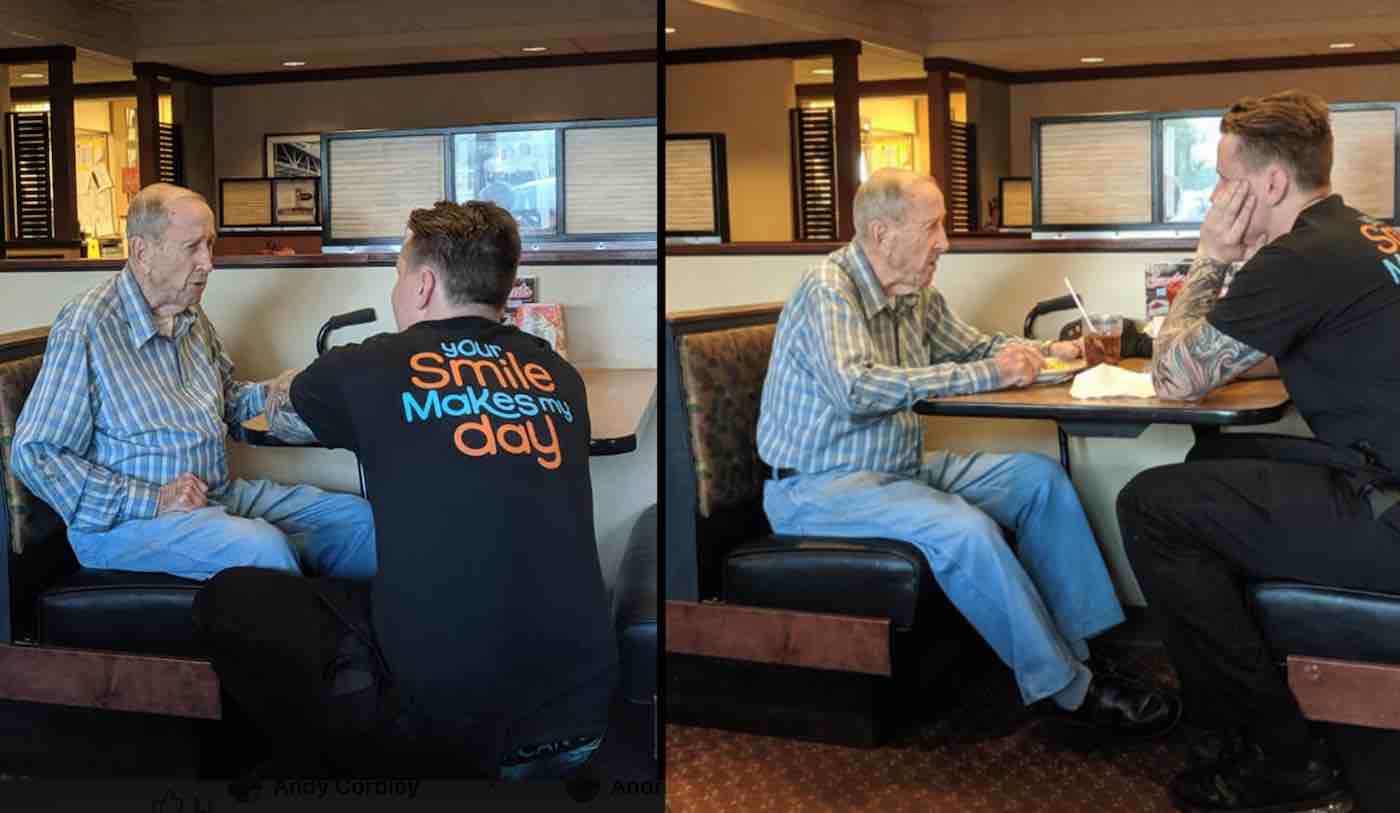 A young man is being praised for his compassion towards a 91-year-old man who was sitting alone for dinner last week.

Lisa Meilander and her family had been eating at Eat’n Park in Belle Vernon, Pennsylvania when she noticed how her server was interacting with a senior patron.

The server, Dylan Tetil, had dropped to one knee so he could give his full attention to the gentleman.

“The man apologized for not hearing too well,” Meilander wrote on Facebook. “He had forgotten to put in his hearing aids. He talked about how he lost his hearing during his time in the war. He was 91 years old with many stories to tell. Dylan patiently listened giving him his full attention.

“Eventually the man apologized for talking so much. ‘I’m alone now,’ he said, ‘and I don’t often have someone to talk to.’ Dylan smiled and said he enjoyed listening.

Dylan then helped the man figure pick out a meal from the menu before putting the order into the kitchen.

Meilander was so touched by the exchange, she tried to flag Dylan down so she could offer to pay for the man’s meal. Before she could, however, another patron asked Dylan the same thing—and to his surprise, Dylan said that someone else had already taken care of the check.

“I guess we weren’t the only ones eavesdropping on the conversation,” mused Meilander. “After the man received his food, Dylan came back to say he was on a break. He asked if he could sit with the gentleman as he ate. As we left the restaurant the two of them were conversing and many people seated nearby were smiling. It was a touching sight.”

Before leaving her table, Meilander snapped some pictures of Dylan chatting with the senior and published them to Facebook where they have since been shared thousands of times.

“With all of the negative stories about our youth today, this was a breath of fresh air. I wonder if I would have been as kind and attentive if I were the one working there,” she added. “One thing’s for sure, if you are ever at Eat’n Park in Belle Vernon, ask for Dylan. If he’s your waiter you’re certain to get great service.”