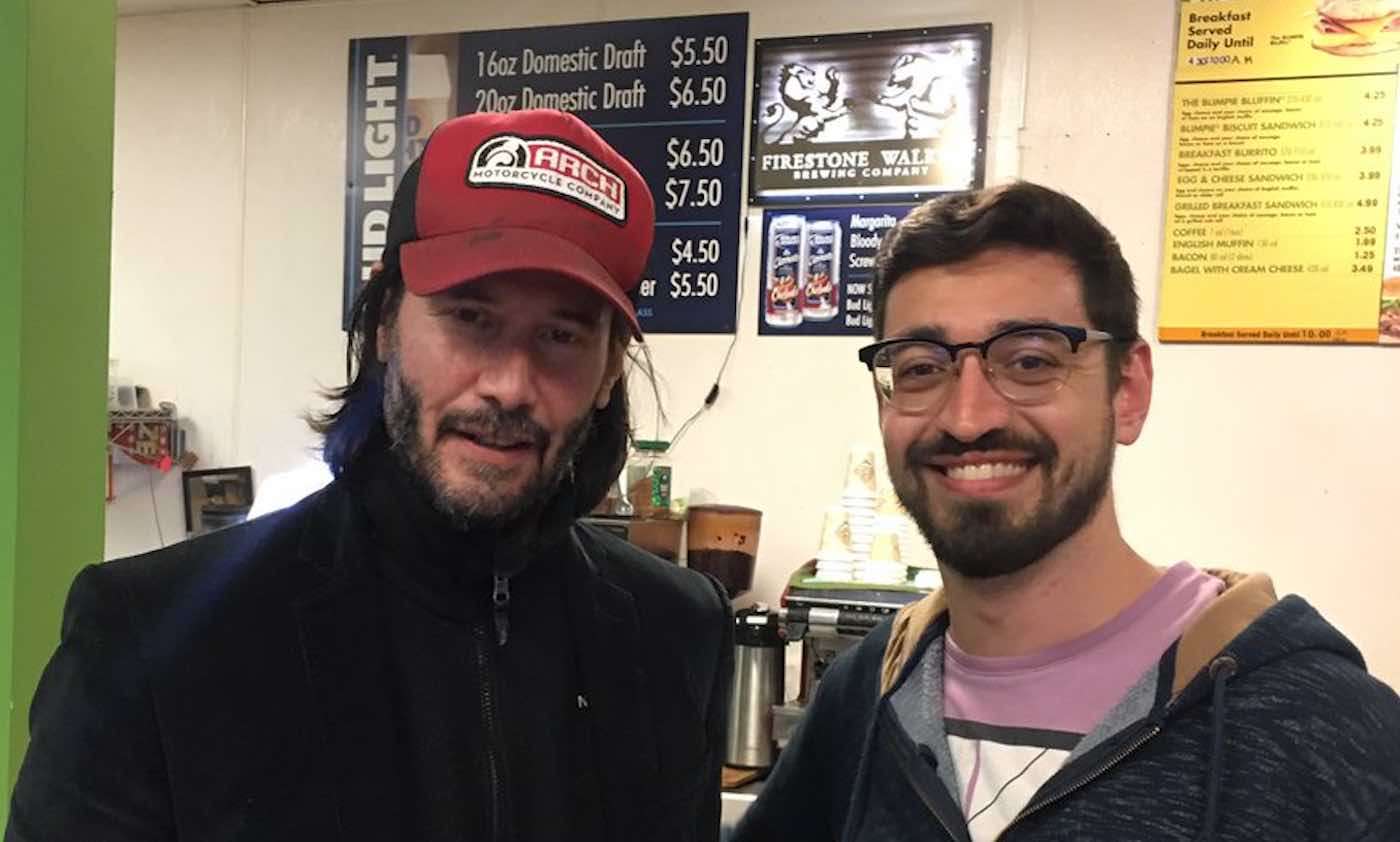 LISTEN to this cool story on the radio below from The Good News Guru (our GNN founder), or READ the FULL story below…

Dozens of airline passengers were left stranded at a California airport last week after a mechanical issue forced their plane to make an emergency landing, but the jilted travelers were soothed and entertained by a very special passenger: Keanu Reeves.

We already learned last year that Reeves is a secret charity hero. For 15 years, he’s played a blockbuster role for kids with cancer, raising funds and making personal visits after his sister’s diagnosis of leukemia.

Until his connection to the foundation was leaked in 2018, he had done it all anonymously—but he didn’t hide his face on the flight last week, which left dozens grounded in Bakersfield, California two hours north of their LA destination.

Throughout the airplane ride, Reeves had reportedly been very amiable and talkative with airline employees. He had “enthusiastically” been talking about his new project and agreeing to take pictures with eager fans before the plane was forced to make its landing.

Rather than using his celebrity resources to flee the airport in private, the Canadian actor worked with airline staffers to arrange for a fleet of vans to escort every single one of the passengers to their exact destinations.

That time when your flight out from #GDC almost crashes and you have to emergency land in a remote airport but at least Keanu Reeves is having as bad a day as you are. pic.twitter.com/XSPa1wlNuO

Reeves himself hopped into one of the vans and spent the next two hours entertaining his fellow travelers, playing California country music on his phone while reading aloud fun-facts about Bakersfield. (See the video below.)

“Its population is around 380,000,” he read in a bemused tone, “making it the ninth most populous city in California.”

After playing tunes by Bakersfield Sound, the passengers were dropped off one by one, with Reeves bidding them a cheerful and fond farewell, sending them on their way.

keanu got stranded somewhere in california and had to take a bus instead of a plane and some guy filmed the entire experience and i am BEGGING yall to watch this pic.twitter.com/I1TmLOEYiK

This is not the first time that the John Wick actor has made headlines for being a cool, down-to-earth guy. Recently it was revealed that when two women, who were in awe of the film star, broke onto his property, rather than calling the police, Reeves invited them in for a beer.

Share The Keanu Kindness With Your Friends On the Social Matrix…

RELATED: Unable to Find Housing After His Historic Prison Release, Kim Kardashian Offers to Pay 5 Years of His Rent