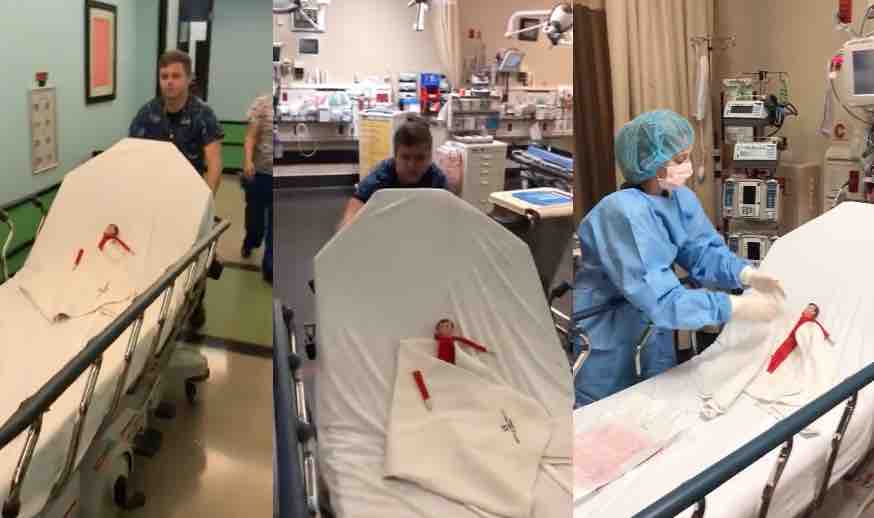 Earlier this week, Jenn Thelen woke up to the sound of her 7-year-old daughter Aubrie screaming over a horrific tragedy: the family’s German shepherd had mauled the little girl’s beloved Elf on the Shelf doll named Sam.

Because Santa does not allow anyone to touch the sneaky elves, Aubrie had no idea how Sam could be saved. It was going to take a Christmas miracle to fix the doll’s injuries.

Luckily, Jenn is the nurse manager for the emergency department at Arnold Palmer Hospital for Children in Orlando, Florida.

The hospital staff insisted that Santa had given them “magic gloves” that specifically allowed them to touch Sam. Plus, the treatment would be covered by his “elfcare” plan.

Aubrie agreed to the operation, and the nurses wheeled the little doll into the trauma bay for surgery.

True to their word, a surgeon pulled on some magic Yuletide gloves and restored Santa’s little spy to his former self.

“One of our ER team members, Ashley, carefully put Sam back together again and bandaged his injuries all up,” the hospital wrote on their Facebook page. “She even sprinkled some Christmas magic (glitter) on Sam when she was done.”

“Sam was able to go home to Aubrie later that evening. Jenn showed her all the videos and pictures of Sam’s day at the Arnold Palmer Hospital ER. The magic of Christmas and Sam the Elf continues for Aubrie.”