Home All News Heroes Foster Father of 50,000 Gives Back After Growing Up in Poverty 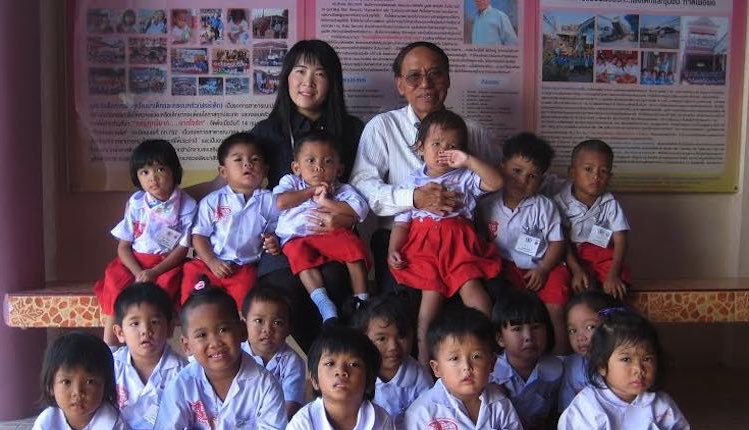 Dr. Amporn Wathanavongs sat at his kitchen table with a glass of orange juice while reading the Bangkok Post. The Thai economy was faltering; everyone was speculating about the extent of the Tom Yum Goong Crash. Within months, the streets would swell with children begging. He needed to do something.

It was 1997. Dr. Amporn had reached the American undesirable age of 60. Although he lived in Thailand, he worked for an American organization, the Christian Children’s Fund. Unwillingly, Dr. Amporn had crossed the arbitrary line forcing him into mandatory retirement.

RELATED: Mom Adopts Hospice Babies No One Else Wants

Born in 1937, he had basked in his mother’s undivided love as an only child. Sawai Jeek, his birth place, was the village where his parents had fled to. Lek, the “Little One” as his mother called him, never knew from where or for what reason. He was orphaned at the age of five when she succumbed to a fatal illness only one year after his father’s death. Lek was left alone to survive in a world no one had taught him to understand.

Lek subsisted by fighting with flea-infested dogs over scraps of pork tossed out by vendors. At 15, he was lured into the Cambodian jungle and forced to become a boy soldier. He killed men and boys, much like himself, except they were displaced from northern Africa. All of them were trapped in a war that was not theirs.

Alone and traumatized at 17, he attempted suicide when he returned from the Indochina war. In the midst of his haze at the hospital, the kindness of a stranger intervened. A woman counseled him to return to his boyhood village where the monks would accept him as a novice.

In the temple he would learn to read and write. She gave him a few bahts for the train ride.

From novice to monk, learning transformed him. No longer illiterate, he allowed himself once again to dream of a family. He made a choice, he disrobed. Determined to work for a foreign company, he took menial jobs while he studied English.

CHECK OUT: Homeless Man Hands Out Resumes Instead of Asking for Cash-and Lands Job

Through serendipity, he met a French Jesuit missionary in the slums of Bangkok. There, at the Angel Center, he discovered his purpose, to help others. With the assistance of the Jesuits, he attended Xavier University in the Philippines. Ironing his classmates’ shirts between classes paid for his food and books while he obtained his social work diploma.

Life took shape. Working for the Christian Children’s Fund allowed him to provide for his family and dedicate himself to helping others. That was, until he reached the age of 60.
American practices confused him. One year, they recognized his work by awarding him an honorary PhD in social works and the next year, they forced him to retire.

MORE: Obama Quietly Signs Ban on Products Made by Children and Slaves

Inactivity did not sit well with Dr. Amporn. He did not need to read the Bangkok Post analysis to understand that thousands of poor children were about to face even greater suffering. He made a choice. He took the savings from his pension fund and took a gamble. He recruited former colleagues, accountants, managers and others who had lost their jobs due to the economic crisis.

On Valentine’s Day, 1998, Dr. Amporn established the Foundation for Rehabilitation and Development of Children and Family (FORDEC). The date was no coincidence. He was entrusting FORDEC with his vision to give love to the loveless. More than a decade later, in the FORDEC schoolyard, two hundred children between the ages of 5 and thirteen, sit cross legged, eyes closed, as a monk leads them in meditation. These children will go home to shacks built on mounds of garbage with tin roof tops. Yet, for 6 hours, 6 days a week, they laugh, eat a hot meal, and learn to read and write. This is their school; they will tell you with pride. Dr. Amporn has changed the course of their lives, along with that of thousands of other destitute children. That is why they call him the foster father of 50,000.

Dr. Amporn Wathavongs life is chronicled in the new book The Boy with a Bamboo Heart: The Story of a Street Orphan Who Built a Children’s Charity by Chantal Jauvin. Contact the Foundation at 2232 WINDLASS WAY,  SAN LEANDRO, CA  94577