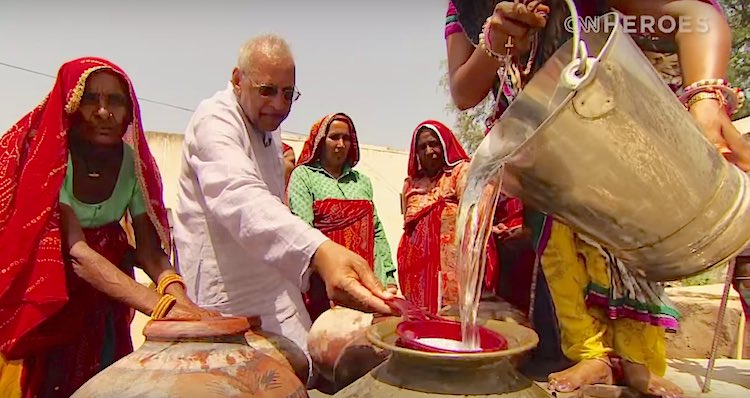 When groundwater started disappearing in the Indian state of Rajasthan, Bhagwati Agrawal invented a way to tap a “river in the sky.”

For most of the year, Rajasthan is so dry, people use sand to clean their dishes. But during monsoon season, there is plenty of rain — enough water to last villages for an entire year if they could capture enough of it.

Agrawal invented a way to do that, a water collection system called Aakash Ganga – Hindi for “River from the Sky” – which now supplies 10,000 people with year-round clean, healthy drinking water.

A public-private partnership rents rooftops and sets up collection networks of pipes and underground storage tanks. Part of the rain captured by his system goes to the homeowner, the rest through a series of pipes to community reservoirs.

Agrawal is spreading the systems through Indian villages through his nonprofit, Sustainable Innovations, but he’s also spreading a better quality of life. When families no longer have to spend precious time hauling water long distances, adults can spend more time working and children can spend more time in school.

In the villages where he’s deployed the rain harvesting systems, overall health has improved and dairy cattle are producing twice as much milk.

Once a Desert, Ethiopia Turns Wasteland Into Fertile Farms

His work has made Agrawal one of CNN’s Top Ten Heroes of the Year.

You can vote for him as your choice for Hero of the Year at CNNHeroes.com. The network will announce the winner at their annual televised award show December 6, and present the 2015 winner with $100,000 for continuing his or her good work.