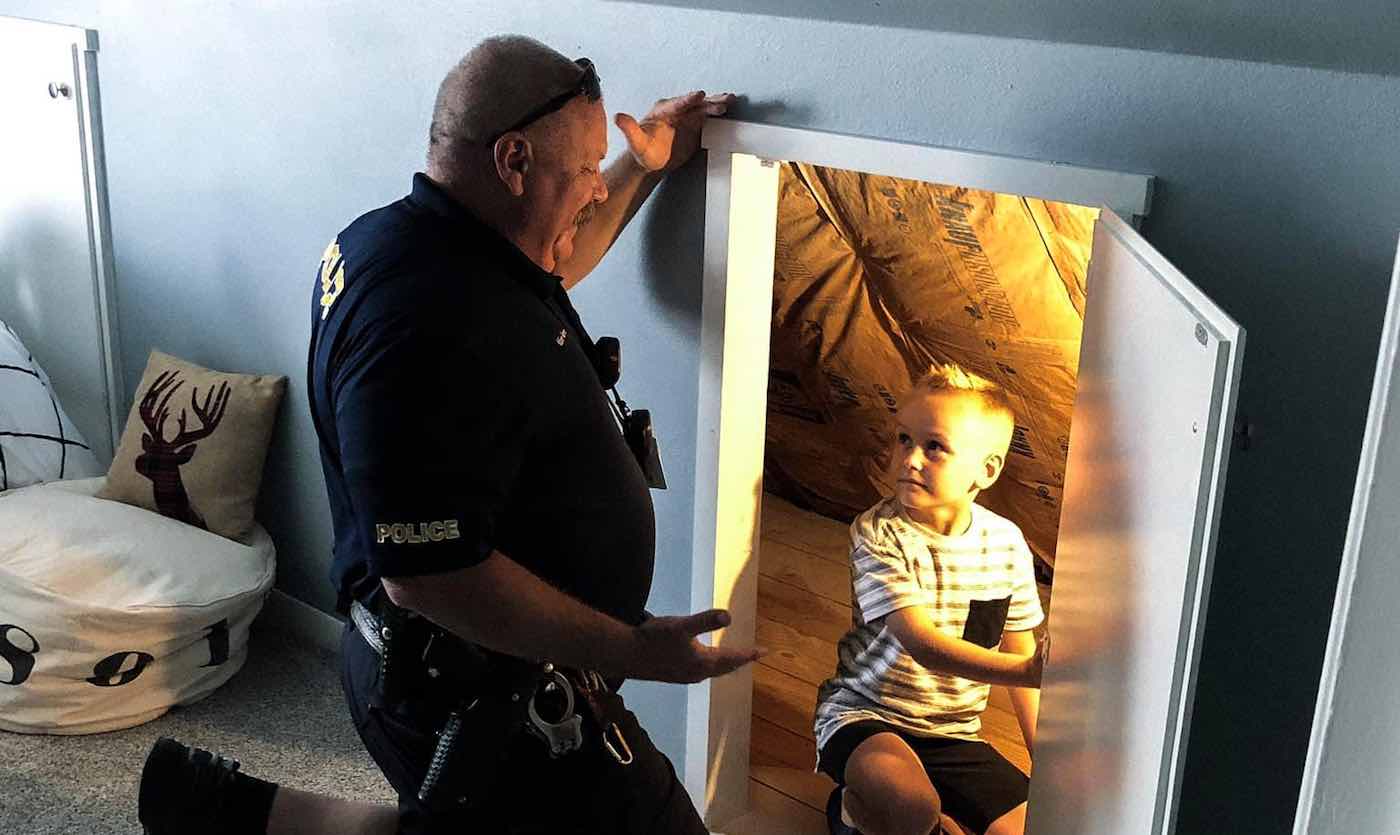 When 6-year-old Hayden Williams was terrified of sleeping alone in his new bedroom, his mother Amanda tried everything to soothe his anxieties—but nothing worked.

Before the family had moved to a new home in Eldridge, Iowa, Hayden had shared a room with his 15-year-old sister; but since then, the youngster with an active imagination, has refused to sleep alone for fear of being attacked by the monsters and villains he believed to be lurking in the new house.

“I’ve tried everything under the sun to get him to sleep in his own room,” Amanda wrote in a Facebook post back in August. “Nothing is helping. He says he … can’t stop the scary thoughts that are creeping into it. He begged me to call the police and a doctor to help him. Seriously breaks my mama heart.”

Determined to convince her son that there was nothing to be afraid of, Amanda took him to the police station in hopes that one of the officers would have the time to ease his fears.

“Of course I’m his mama who fiercely protects him and assures him that those things aren’t real,” she added. “Still doesn’t convince him those things don’t exist. Nothing wrong with allowing him to think an officer could help.”

Initially, Amanda was anxious that the police officers would look down on her for bringing her son to the station like this—but, after taking Hayden to the Eldridge Police Department, the youngster was almost immediately befriended by Officer Bruce Schwartz.

After the officer listened to Hayden’s story, he visited the family home so he could inspect the bedroom and reassure his new pint-sized friend that there weren’t any villains hiding in the closet. Schwartz also confessed that he too experienced scary thoughts before bedtime—but he always made them go away by thinking about happier things instead.

WATCH: Police Officer Helps to Shave Homeless Man’s Face in the Rain After Seeing Him Struggle Without a Mirror

Schwartz’s inspection proved to be just what Hayden needed; the very next day, he awoke at 7AM and proudly told his mother that he had made it alone throughout the night. Not only that, Officer Schwartz returned the same morning so he could check up on Hayden just as his mother was snapping some back-to-school photos of the youngster.

Amanda took some pictures of Hayden and Schwartz and published them to Facebook so she could praise the officer for his kindness.

“Truly takes a village to raise kids right these days! I am beyond thankful that Officer Schwartz took time out of his busy day to come over and talk with Hayden,” Amanda wrote.

CHECK OUT: When Man With Autism Has Violent Reaction to Medication, Mom is Stunned by Officers’ Compassionate Response

“He had a GREAT night last night and went to sleep peacefully and is a very vibrant happy little man. This too will pass and I’m happy Officer Schwartz had a hand in Hayden getting over this very normal hump most children experience.

“Officer Schwartz, if you’re reading this, thank you from the bottom of my mama heart. The kindness you’ve shown Hayden certainly doesn’t go unnoticed and I know he will remember this forever.”