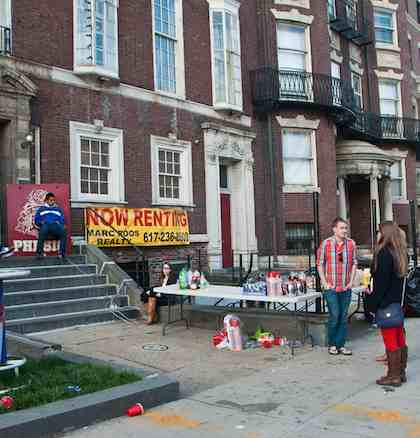 Mr. Rogers famously answered the question of what to tell children when scary things happen on the news. It holds true for all of us if we want to learn about what happened in Boston yesterday: “Look for the helpers.”

We can always focus on the actions of the helpers, if we want to feel better.

1) College fraternities on Commonwealth Avenue offered food and beverages to runners and passersby walking from the scene of the explosions. (right)

2) Cell phone service was shut down in the city so locals were unlocking their WiFi service so people could easily connect and reach out via email and social media.

3) NBC Sports reported that runners in the Boston Marathon who crossed the finish line continued to run to the nearby hospital to volunteer to give blood. Later, the Boston area Red Cross tweeted, “Due to the generosity of our donors, we don’t need blood at this time.”

5) An inspiring spreadsheet was created using Google Docs on Gmail for people to donate rooms, rides and couches to people who were stranded or in need. Google itself also set up a webpage as a “People finder” for helping loved ones to connect and share information.

6) A Boston area restaurant, El Pelon Taqueria opened its doors to runners and locals, tweeting, “We have cold drinks, bathrooms, place to charge a phone and a calm place to sit”. They never shut their doors, apparently giving away refreshments, with the manager tweeting, “my coworkers+staff deserve alot of credit, not one blinked when ask(ed), not one when home when they could, those not working came in”.

(With thanks to the Business Insider for some of the tips)