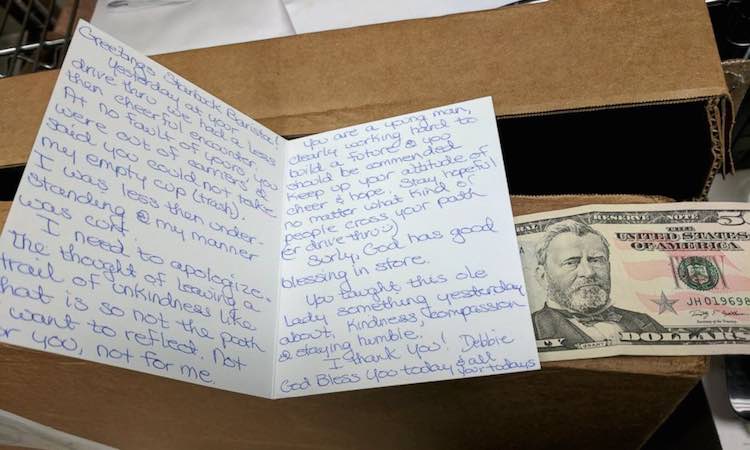 Baristas are pretty accustomed to getting an earful from annoyed customers, but it’s a rare occurrence when they receive an apology card for it.

However, that is exactly what happened to 20-year-old Andrew Richardson last Tuesday while he was working at the Starbucks in Bishop, California.

The day before, Andrew had been chatting with a customer at the drive-thru when inconvenience led the woman to become a bit sour.

“On the 20th, this woman, Debbie, came through the drive through while I was working. She was extremely pleasant, and we had some friendly conversation while her drinks were being made,” Richardson told ABC News. “She had multiple drinks, and we didn’t have drink carriers. I informed her and she was a touch frustrated like anyone would be.”

RELATED: Lady is Thrilled by Starbucks Ability to Take Order in Sign Language

She then asked Andrew if he could throw away the trash that was inside her car, but since that would be a California health code violation, he explained that he couldn’t.

She became slightly more frustrated, but still drove away with her beverages and Andrew quickly forgot about the incident.

But then the next day, the woman returned to the drive-thru when Andrew was working once more.

MORE: Customer Admires Chick-fil-A Employee So Much, He Built Him a New Home

After apologizing for her behavior, she gave the barista a card. When Debbie left, Andrew opened the card to discover a $50 bill along with the most meaningful note he had ever received.

“I returned to it later, opened it, and I was completely shocked,” said Andrew. “Without the money, this was one of the most beautiful and heartfelt things I have ever read. It absolutely made my day when I read it. The money was unnecessary. The card alone was the best part. I would have turned the money down had I opened it when she was there. It’s hard to take things like that.”

Andrew and the store supervisor both said that even though customers have often gotten much nastier than Debbie, no one has ever received such a sincere response from a consumer. The experience became one that Andrew says he will never forget, especially while working in the food industry.