Home All News Inspiring Stranger Gives the Boots Off His Feet to Freezing Homeless Man on...

Jessica Bell, an attorney and advocate in Chicago was riding the subway home late last Friday evening when she witnessed a spontaneous act of kindness that brought tears to her eyes.

A homeless man, who later said he was from Louisiana, pulled his swollen feet from a flimsy pair of running shoes that were clearly not intended for a Midwestern winter. The shoe backs were folded down like slippers to leave enough room for a thick layer of socks to fit inside.

“I don’t know how many pairs of socks he’s wearing in an attempt to keep his feet warm but there is blood seeping through,” she wrote on Facebook.

38-year-old Maurice Anderson was traveling back to his hometown to visit his daughter, like he does every weekend, when he saw the same heartbreaking scene unfold in front of him.

He suddenly wanted to give his own boots, but started arguing with himself: He’d just bought the boots a few weeks ago, and paid $260 for the pair. But within 30 seconds he was unlacing them, and asking the man what size shoes he wore.

Bell continues, “Quietly in-a-blink-and-you’ll-miss-it fashion, the younger man takes off the boots he’s wearing and passes them to the old man… He opens his suitcase and gives him a pair of socks as well.” 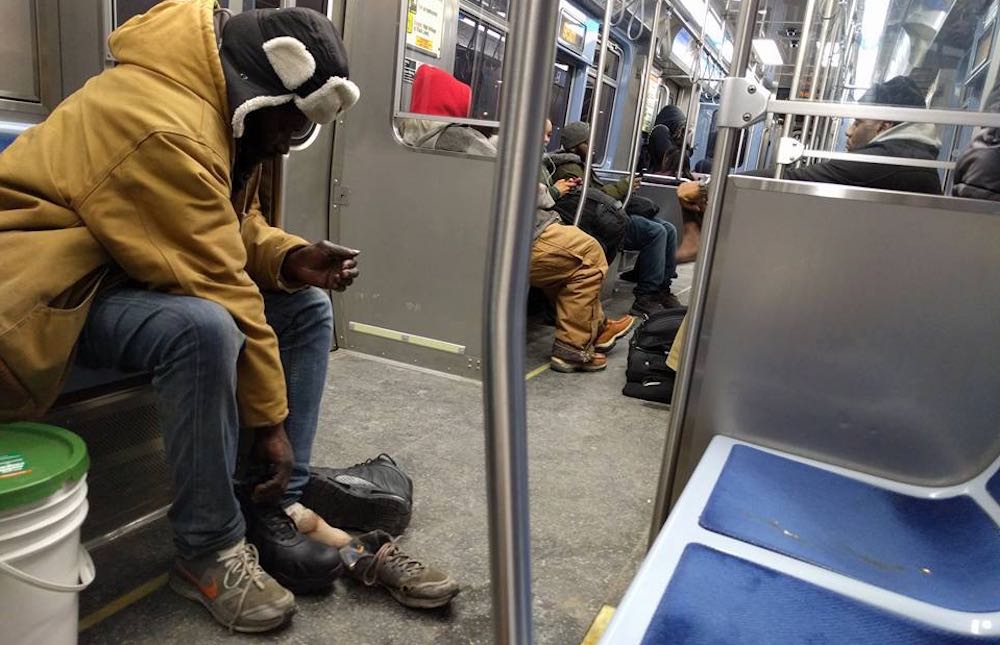 RELATED: When Homeless Man Helps Lady With His Last $20, She Repays Him 100-Fold

Maurice then pulls out a spare pair of shoes from the suitcase. “These shoes are nice too, but not as nice as the boots,” Jessica wrote. “They would have fit the old man just as well, but they were not what this old man needed.” Especially because he believed his feet might already have frostbite.

“If you’ve got 20 pairs of shoes, you can only wear one at a time,” Anderson told Good News Network. “I wished I’d had more socks.”

“The reason I posted about Maurice is because we’ve all given, or see people give food, or money to the homeless, but I have never seen someone give the clothes off their back so unselfishly and so humbly,” Bell told Good News Network by email.

Maurice said that when he was exiting the subway car, Jessica, who is the founder of Project Bleeding Love, which supplies homeless women with feminine hygiene products, approached him and almost burst into tears, saying, ‘Ive never witnessed anything like that.’ She gave him her card so they could keep in touch.

MORE GOOD NEWS: Military Sons Tell Mom Not Every Soldier Gets Care Packages Like Them So She Sends 10,000 Boxes

Anderson, who had tried to find a job as a laborer with the city, finally needed to move to Cincinnati because he found work there. It would seem like a man with his integrity (and dedication to his daughter), would be a welcome addition to many companies in the Windy City.

Maybe his newfound fame will land him a position with good pay, and he can continue warming the hearts of people in this icy town.

POPULAR: Coffee and a Muffin at Restaurant Drive-thru Saves a Stranger’s Life

SHARE to Help Maurice Find a Good Job… Or,  (Photos used with permission)