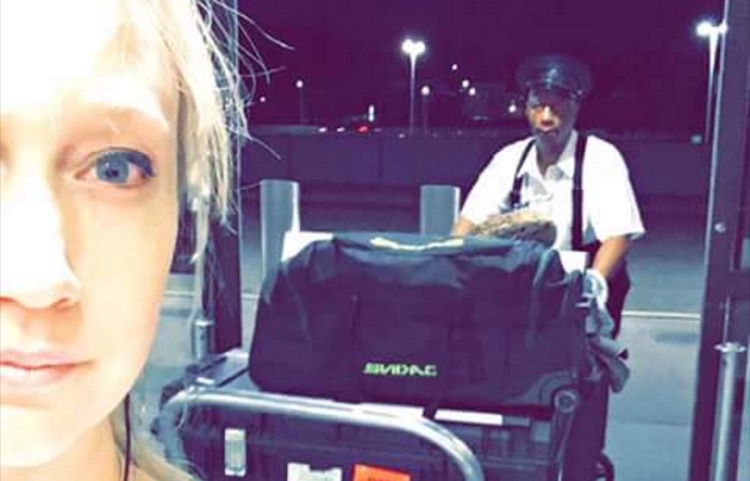 With 375 pounds of luggage in tow, this mother was about to miss her flight home where she was going to take her son into a surgery that had been scheduled for months.

She would have missed it too, if it hadn’t been for Gus Davis the baggage handler.

Heather Nashelle is the founder and CEO of Nashelle Jewelry. While on her way to La Guardia airport, she had been laden down with heavy bags of products from a trade show in New York City. Her flight home would bring her back to Bend, Oregon where she could then take her son to the Oregon Health and Science University for his operation.

After arriving at the airport, Gus helped the jeweler with her heavy bags, said his goodbyes, and left her at check-in while her plane was boarding inside.

That’s when Heather’s card mysteriously got declined for the baggage fee.

In tears, the mother knew that if she didn’t pay the bill quickly, she would miss her flight –and her son’s surgery.

Gus, noticing her distress at the counter, stepped forward, paid her $150 fee without a word, and started rushing her through the busy airport.

After telling TSA to get Heather through security quickly, the two exchanged contact information and said their goodbyes.

RELATED: Neighbors Clean Up Vandalism Before Family Returns From Vacation

Overwhelmed with gratitude, the entrepreneur knew she was going to pay her savior back – so in addition to giving him double the original amount of the baggage fee, Heather set up a fundraiser for Gus on her company’s website.

Her business team released a $15 bracelet featuring a small brass Pay It Forward heart in honor of his kindness with the net proceeds of the sold accessories going to the baggage handler.

In just four days, $3,000 had been raised in recompense for his compassion.

MORE: Stranger Waiting in Line Behind Teacher Pays For Her School Supplies

“We will never know each other’s stories but you exemplified humanity in its finest form this morning,” Heather wrote on Facebook. “You are an amazing man to have extended me kindness without even knowing the sheer fear in my mama heart.”

Heather’s 17-year-old jewelry company is the home to 40 different designers and artists hand-crafting metal pieces for the modern fashionista. Since the designers donate one plate of food to the homeless for every piece of jewelry sold, it’s not hard to chalk Heather’s fortune up to positive karma coming back to reward her.