Home All News Kids Boy Was Inspired to Become Youngest Yogi in US After Seeing How... 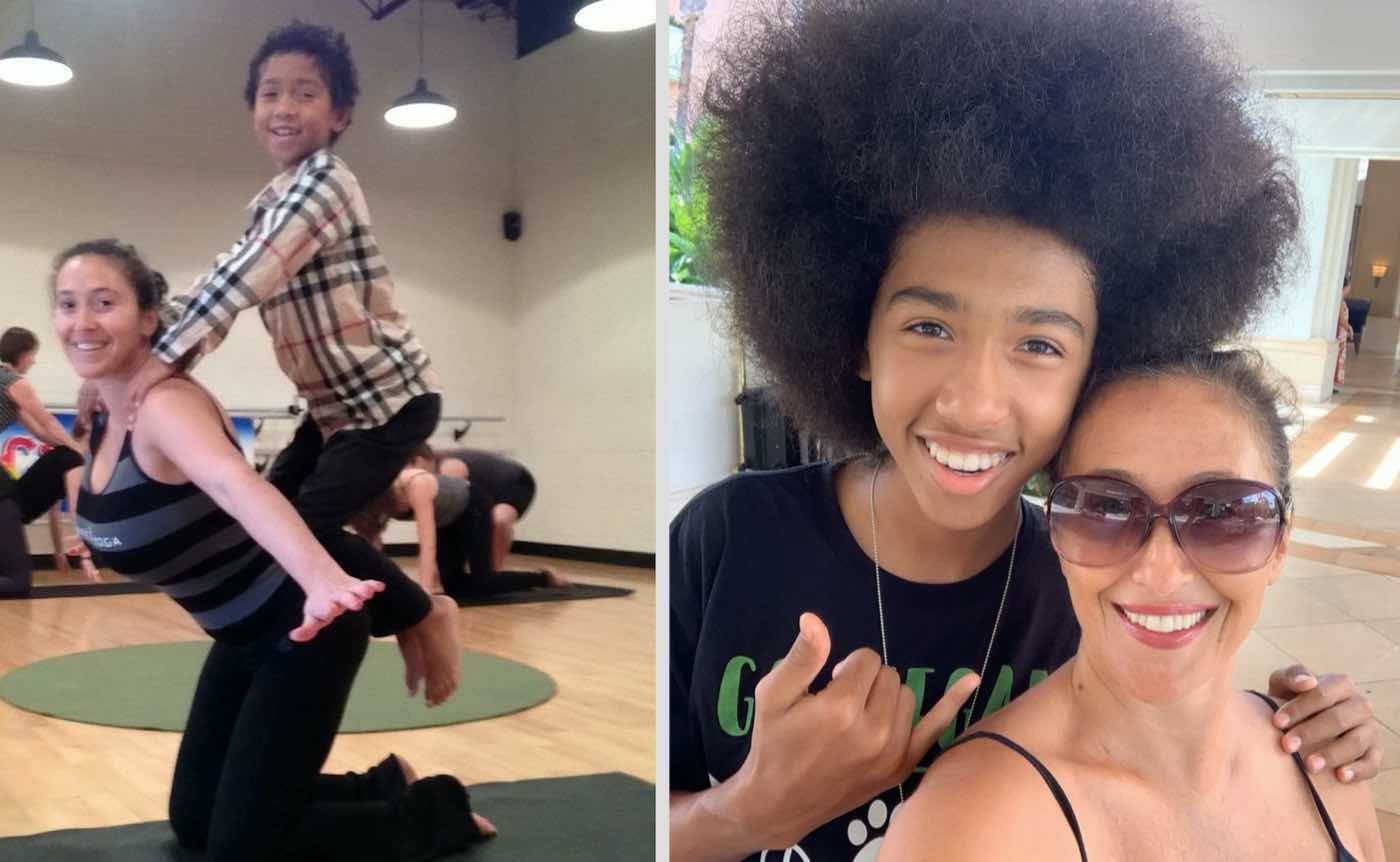 At just 7 years old, this boy was inspired to become the youngest yoga teachers in the United States—and one of the youngest in the world after he saw how the ancient discipline helped his mom recover from chemotherapy.

The young yogi was devastated to watch his 40-year-old mother Sahel Anvarinejad struggle as she underwent chemo and even shaved his head in solidarity when she lost her hair.

LOOK: How a Yoga Teacher is Saving First Responders Across America From Depression—With Downward Dog

But when he saw how yoga helped her to walk and find joy in life once more, he was determined to help others find the same healing on the mat.

“My mom beat cancer and two weeks later, she was introduced to yoga,” says Tabay. “She was able to walk on her own and things that used to stress her out didn’t matter as much as they did before.

“That’s when I decided to be a yoga teacher,” he continued. “I wanted to teach yoga so I could heal people the way yoga had healed my mom.”

Sahel was diagnosed with stage 3 non-hodgkin lymphoma in April 2012. She says: “I had gone to the doctor for almost a year complaining of flu-like, cold-like symptoms,” says Sahel. “By April, I could barely breathe. My neck became so big that my parents took me to the emergency room. The tumors were the size of softballs.

“Doctors told me if I had waited til the next morning to come to hospital, I wouldn’t have made it.”

Sahel underwent intensive chemotherapy treatment and spent almost all her time in a hospital bed.

“I was in such bad shape. I was basically living at the hospital,” recalls Sahel. “Tabay couldn’t be around me a lot, all we had were quick visits.

“It was really hard because I had everything you could imagine—blood clots, blood transfusion, bone marrow biopsy, and staph infection. But I am a single mom and all I kept thinking about was Tabay. He was 6 years old, I didn’t want to die.”

When Sahel lost her long hair as a side effect of the chemotherapy, her devoted son even shaved his head in solidarity with his sick mom.

“He came and surprised me with a shaved head to support me,” says Sahel. “He was so sweet.”

In September 2012, doctors told Sahel she was cancer-free. After being broken down by the chemo, however, Sahel worried about how she would build up her strength.

“I had been very active, I did pilates five times a week and I went to the gym—but before my diagnosis, I judged yoga,” says Sahel. “I assumed it was for people who wanted to sit in a dark room with their eyes closed. I thought: ‘No thanks, I’ll get a workout.’”

RELATED: Check Out This Yoga Studio Made Entirely of Salt For Extra Health Benefits

But Sahel’s mind changed when an acquaintance, who had supported her during her cancer journey, turned out to be a yoga teacher starting a teacher-training course.

“I walked into the gym and she was sitting in the lobby with eight other people who had been doing yoga together and they had huge manuals in their laps,” Sahel remembered.

“She told me she was starting a 200-hour teacher training course. I laughed. I had barely done yoga in my life. I couldn’t walk or bend my knees. I was still bald with no eyelashes, no eyebrows, no hair. She just said: ‘This is meant to be’.”

Sahel admitted that at times, she didn’t think she would complete the course but Tabay was by her side.

“There were so many times that I wanted to leave,” she said.

“Tabay was by my side the whole time, I didn’t have anyone to watch him. The training was two and half months long and in those months, I was able to walk again.

WATCH: 4-Year-old Girl Saves Mom’s Life With ‘Bravery and Poise’—All While Calming Her Siblings and Dogs

“I felt like I could take a deep breath for the first time in years. I thought: ‘This is life-changing’.

“And then Tabay said to me: ‘I want to be a yoga teacher so I can heal people the way yoga healed you.’”

Tabay received his first yoga certificate at 7 years old and underwent the very same 200-hour teacher training when he was 10 years old.

“It was me and four adults,” he recalled. “It was very intensive teacher training.

“At certain times in training, they wanted to give up but when they saw me, a 10-year-old, doing it, it made them think they could do it too.”

WATCH: 9-Year-old Who Got in Trouble for Doodling in Class Now Has Job Drawing On Restaurant Walls

Tabay now has seven yoga teacher certifications, including aerial yoga, restorative yoga, and yoga for those on the autism spectrum.

The youngster splits his time between teaching three classes a week either at his mom’s studio Care4Yoga in San Clemente, California, or in resorts and schools in Maui, Hawaii. Additionally, he has taught yoga classes all over the world, including in the UK, France, Australia, Mexico, and New York.

“At my mom’s yoga studio, I teach some donation-based classes where I donate all the money we make to helping people who have cancer,” says Tabay.

He added that some students are shocked to walk into class and learn that their teacher is a 14-year-old.

“Sometimes they ask me where the teacher is,” says Tabay. “At the beginning, they often don’t think it’s going to be a good class. But my sixth grade English teacher took one of my classes—she has been doing yoga for 19 years—and she said my class is the best she ever took.

MORE: 11-Year-old Crocheting Prodigy is Raising Thousands of Dollars for Orphans–One Stitch at a Time

“A lot of students leave crying after class because it’s such an amazing experience.”

Tabay also taught yoga at a school in San Francisco for children on the autism spectrum.

“The school staff called my mom and warned us that sometimes these kids can get violent, they can’t have their eyes closed, they can’t make contact with other students.

“I still wanted to teach them and in class, the students were all doing meditation with their eyes closed and they were doing partner poses with each other.

“The staff were shocked,” he added. “It just goes to show you that everyone is capable.”

“Once my students try the food they are shocked, because it tastes like the real thing.”

Tabay and Sahel start each day by practicing yoga for an hour together. The youngster, who graduated high school earlier this year with a 4.0 GPA, says that yoga helped him concentrate on his school work.

CHECK OUT: 14-Year-old Awarded $25,000 For Her Invention That Totally Eliminates Blind Spots in Your Car Using a Projector

Tabay is also a vegan cook and teaches vegan cookery with his mom in Hawaii and California. He now plans on growing up to be a full-time yoga instructor and vegan chef.

“I want to continue inspiring as many people as I can to live healthier,” says Tabay.

Tabay shares his yoga teachings on his Instagram page and also offers online yoga and vegan cooking courses on his official website.