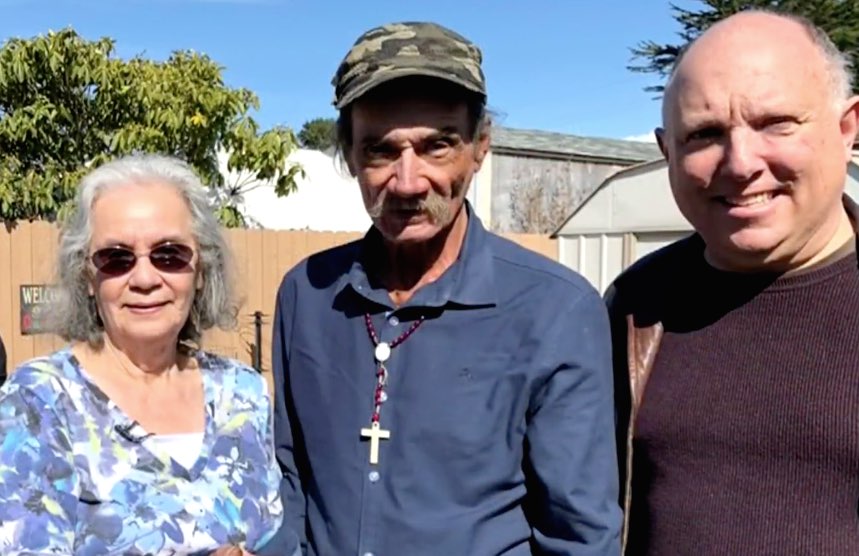 LISTEN to this Good News Guru story broadcast on radio with Ellen and Geri on KOST-103.5 (And, subscribe to our new podcast on iTunes or for Androids: on Podbean) — or Read the story below…

It’s been three months since a sheriff deputy’s act of kindness launched a 67-year-old homeless man into international headlines. Thanks to a chain of events that followed, the man who thought he was “alone in the world” recently was introduced to the family he never knew he had.

Michael Myers had been panhandling on the roadside back in November when Deputy Jacob Swalwell spotted him from his cruiser and pulled over to remind the homeless man that standing alongside a highway was illegal.

Instead of issuing a citation, however, Swalwell struck up a conversation with the man.

“When Swalwell asked Michael for his identification, he said he did not have one. This is often an excuse we hear from people who have warrants or are lying about their name,” said the police department on Facebook. “[But] when people are truthful and sincere, we often take notice. That’s what Swalwell felt when he began to talk to Michael.”

LOOK: Couple is Shocked to See Themselves in the Same Tourist Photo From Years Before They Met

In order to get approved for a Californian identification card, Myers had to show two government-issued forms of identification or proof of residency. His lack of any documentation had been a big reason why Myers had never been able to get a job or bank account, or government assistance.

The officer spent the next month jumping through bureaucratic hoops to acquire an ID for his new acquaintance. When he finally succeeded in tracking down the 67-year-old’s birth certificate and getting the necessary documents for a state ID, Myers’s story was picked up by dozens of news outlets.

RELATED: Woman Realizes the Old Dog She Just Adopted Was Same One She Had as a Child

Askins volunteers for Miracle Messages – an organization that reunites homeless people with their long lost families.

The detective learned that Myers had grown up adopted, and had always felt excluded from the family because his adoptive mother so favored his biological siblings. Eventually, his siblings disowned him, and after their parents and some childhood friends passed away, he became resigned to live a life of loneliness and solitude.

Read More and Watch The Heartwarming Reunion Below…