Home All News Inspiring When Stranger Finds Lost Wallet on Airplane, He Returns It to Owner... 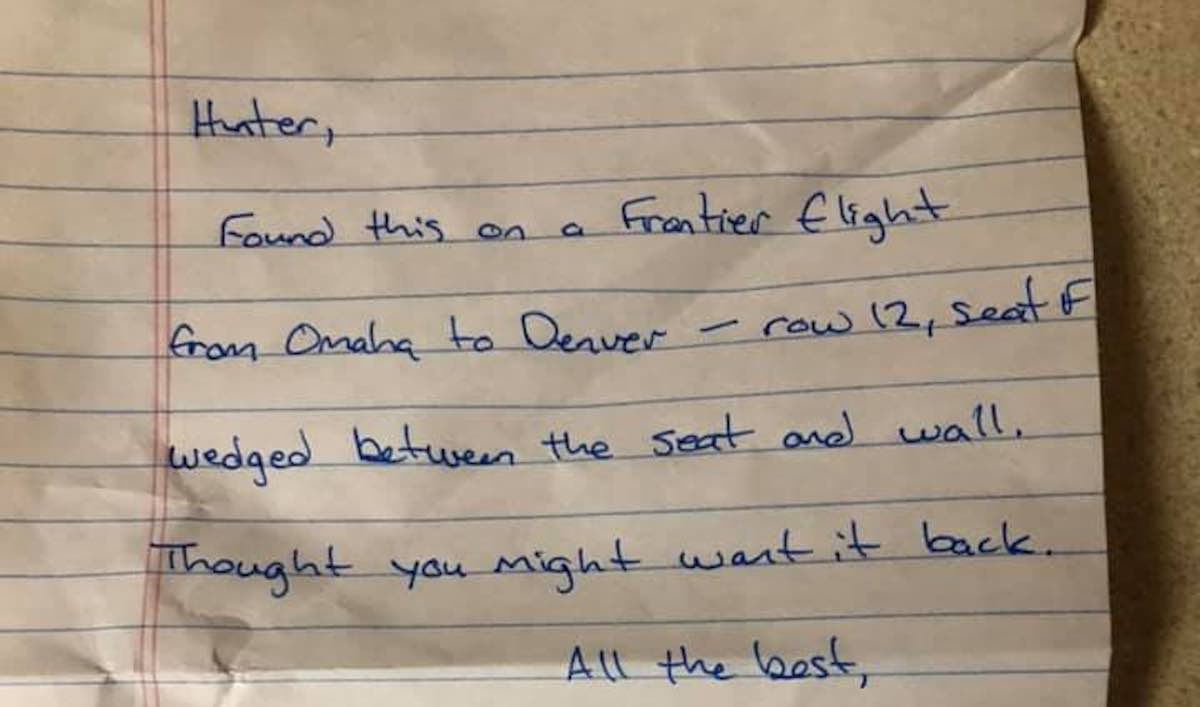 A compassionate airline passenger ensured that a 20-year-old man was reunited with his lost wallet – along with a little extra something to make up for their time apart.

Hunter Shamatt first lost his wallet while he was on a Frontier Airlines flight from Omaha to attend his sister’s wedding in Las Vegas earlier this month.

Upon realizing that his wallet was lost, he contacted the airline to see if anyone had turned it in – but to no avail. Since the wallet contained his ID, a signed paycheck, his debit card, and $60 in cash, he “feared the worst”.

Shortly after the flight, however, Hunter was stunned to receive a package in the mail from an anonymous sender. Inside was his wallet – along with an additional $40 in cash.

WATCH: 48 Years After Reading the Christmas Card That Got Him Through the Vietnam War, He Finally Got to Meet the Sender

“Found this on a Frontier flight from Omaha to Denver-row 12, seat F wedged between the seat and wall,” read a letter that was enclosed with the package. “Thought you might want it back. All the best. PS: I rounded your cash up to an even $100 so you could celebrate getting your wallet back. Have fun!!!”

Hunter’s mother, Jeannie, posted a photo of the letter to social media in hopes that they would be able to track down the sender and thank them for their kindness. All they had to go on was that the letter was sent from Applied Underwriters in Omaha and the sender’s initials were signed: “T.B”.

The Good Samaritan was later identified as Todd Brown, a father-of-five who was delighted at the chance to “have a little fun” with helping out a hard-working stranger.

“They were very thankful. Hunter was very thankful. He told me he has some student loans and a car payment that he needed to make so the timing was right,” Brown added. “They assumed it was gone forever. So when he opened it, [Jeannie] said he just started screaming, ‘No way! No way!’”

RELATED: When Radio Station Hears About Mom Struggling to Care for Sick Son, They Give Her Surprise She Will Never Forget

Brown says that he often tries to do good deeds without any recognition, hence why he neglected to sign his full name on the letter, but Jeannie later insisted on praising the Nebraska native on social media.

“I try to teach my children to do the right things in life, help people when you can regardless of the outcome,” she wrote on Facebook. “This story is more about restoring faith in people than anything.

‘Everything in the wallet we could of replaced. We hear a lot of bad news but not enough good news. I personally want to thank Todd Brown and his wife for restoring faith that there are amazing people out there, the world is not as grim as it’s being made out to be.”