Home All News Inspiring Students Worried About Parked Police Car at School Until They Saw What... 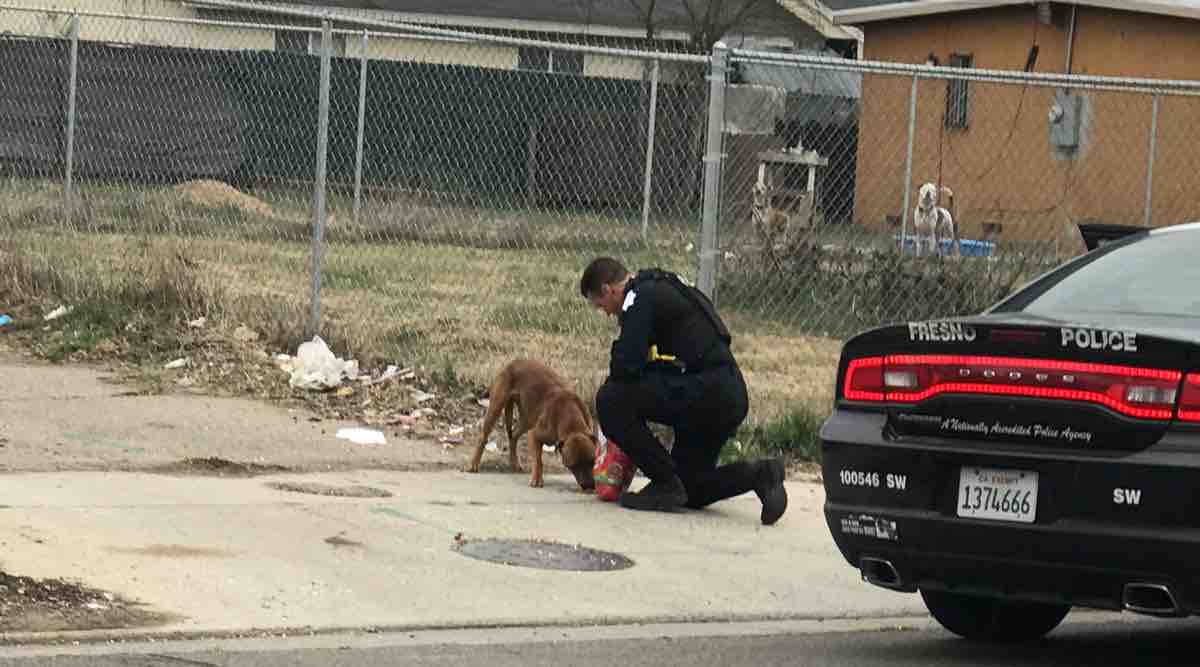 While students and parents discussed their concern over the police car that was parked outside of school two weeks ago, their worries soon melted away when they realized what the officer was doing.

Officer Sean Morris had pulled over on the side of the road in front of Edison-Bethune Charter Academy in Fresno, California so he could feed a stray pit bull mutt that had been sifting through the trash.

Morris had reportedly spotted the dog as he was making his rounds throughout the neighborhood earlier in the day. Worried about the pup’s physical condition, the officer bought a bag of dog food at a nearby store and returned to the scene.

When he found the canine, it was trying to eat a dead squirrel that was in the middle of road.

LOOK: When Woman Sees Anxious Man Missing His Lost Pen, She Grew Determined to Reunite Them

Morris herded the dog towards the sidewalk, kneeled onto the pavement, and poured out a bowl of dog food. When the pup gobbled down the whole meal, Morris poured him another one.

Mary Solis, who is a truancy officer at Edison-Bethune, snapped a photo of the officer’s kind gesture, and later posted it on social media.

RELATED: Women Encircle a Crying Mom Whose Toddler Was Having a Meltdown at the Airport

“It was cool to see the officer do that,” said Solis. “You know, usually when the kids see an officer, they think something bad happened. Some of the parents had stopped and were worried.

“But then we saw the kind gesture. It was real heart-warming.”

There have been no updates on the dog’s whereabouts since the story was shared two weeks ago – but Officer Morris has received an outpouring of praise for his compassion.